I remember back in the day when I played Pokemon Emerald on and on and on on my Nintendo Gameboy Advance. Man, catching all the Pokemon I wanted, all the shinies, all those IVs and EVs you have to learn when raising a Pokemon, that was brutally hard. That was until I was introduced to Ciro's Pokemon Maker.

Ciro's Pokemon Maker is literally what it is: A Pokemon maker. Say you want a male Shining Mewtwo in a Luxury Ball that has a Hardy nature, all stats at 255, and has won all master rank ribbons in all categories of Pokemon contests. If you played on cartridge before, you'll know this is second to impossible, unless you're running Action Replay, which is additional expense. Fortunately for you, Ciro's Pokemon Maker will give you everything you want in your Pokemon. It can even give you a hold item of your choice! You don't even have to go to Pokemon HQ New York to win prized items!

Ciro's Pokemon Maker is a very complete Pokemon tool that it can in fact give you 9999 Master Balls or 9999 Rare Candies in your PC Item Box. No kidding. Once you've downloaded the program, head to the Items tab and just select the item you want to appear on your PC, generate the code, and paste. Now that's almost infinite Master Balls.

It's easy to navigate through all the options at Ciro's Pokemon Maker. Look at the picture below (Click to enlarge): 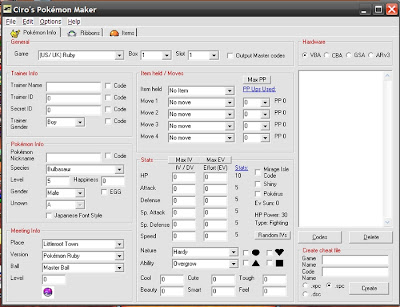 It's like inputting AR codes in NO$GBA. Don't forget to set your trainer name, ID and hidden ID exactly or else the system will think it's a traded Pokemon. What's great is, this thing works on all custom Pokemon games out there, as long as it's Emerald/Fire Red/Leaf Green/Ruby/Sapphire-based.

If you want to download Ciro's Pokemon Maker (which I know you will), hit the download link below:

You remember that Shining Mewtwo I was talking about? Why not go for a Shining Deoxys this time? Trust me, I have it all because of this Pokemon Maker.

Thanks to mi amigo Ciro Bogea Fernandez for developing this nifty piece of software.

P.S. If you happen to know a PSP emulator called gPSPKai and know a couple of tricks, you can play your custom Pokemon there instead of sitting in front of your NO$GBA emulator.