Fortunately, Nokia, Verizon, Windows and Google Nexus devices are confirmed to be Carrier IQ-free. Meanwhile on the RIM front, an alleged employee of the company says that RIM never authorized the use of Carrier IQ on any of its products. 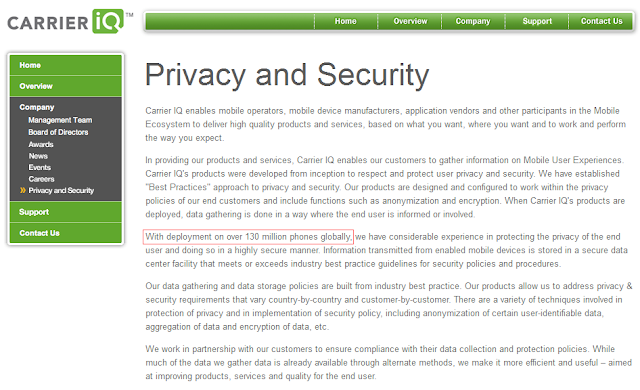 So anyway, here's how to remove Carrier IQ on Android and iPhone devices:

For Android phones and tablets

1. Fetch and install Trevor Eckhart's Logging Test App from XDA-Developers by emailing the APK installer to yourself and downloading the attachment to your phone or tablet. That should work;
2. After installing the program and initiating it, press "CIQ Checks." The app will now start a sequence that would check if there's any Carrier IQ spyware on your phone or tablet. If Carrier IQ is present and you want it removed, you'll have to shell out $1.00—yes I know it's ridiculous. But nothing's free no more—and the Logging Test App will remove it for you. Good news and bad news here. Bad news: It doesn't always work at this point in time. Good news: Updates are constantly on the go and it would soon be successful 100% of the time.

Sadly this is the currently the only known way to remove the Carrier IQ warez although people in the industry are sure that major carriers will release a Carrier IQ crippler in the following days.


For iPhones and iPads (iOS 5 only)

Luckily the Carrier IQ disabling process is hell easy on the iPhone and iPad. A little bit of a warning though: This process doesn't remove the Carrier IQ rootkit from your iPhone or iPad. It just deactivates it and refrains it from sending any more identifiable and private information. It's better than nothing though.

If you’re stuck at lower iOS versions and if your device is jailbroken, you should check out Chpwn’s post right here.

With the digital age's privacy invasion becoming more and more prevalent, the only thing we could really rely on are crackers and tech-savvy privacy experts' reveals. I mean, even if we're vigilant about not spilling anything about our private life, unscrupulous carriers can do just that: install rootkits without our knowledge. For money of course.