When we hear Froyo or Ice Cream Sandwich, well, aside from thinking of food, we all think of the Android OS. Unlike Google though, Apple is very mum about its version codenames for its iOS. If you hear about Little Bear and Big Bear you'd think it has something to do with Goldilocks.

So a couple of hours ago, dev Steve Smith released via Twitter the codenames for past to present iOS version codenames. It's not as symbolic as Android's (the Android op systems follows their version names by the alphabet with each version being named after a sweet treat starting with Cupcake followed by Donut then Eclair etc. I don't think Astro and Bender are sweets) but it's still something. Check the screengrab below. 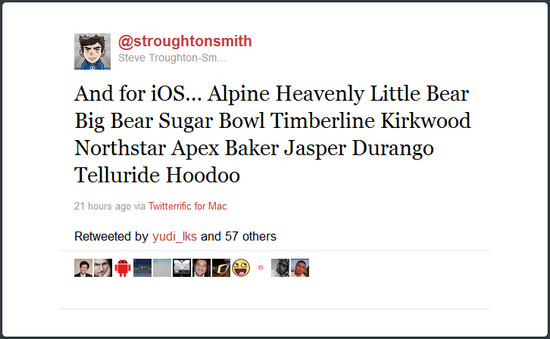 So basically Telluride and Hoodoo (that's 5 and 5.1 for you) would reduce your iPhones into glorified paperweights in the Philippines. Nothing serious here. Just some fun facts.