I traverse through the famed SM Megamall every once in a while to buy stuff, see stuff, and eat. Yesterday though I was met by a happy confusion when I set foot on its Cyberzone area: Phone brands have begun establishing their presence by building their own showrooms.

I don't know how long these phone brand stores have been there, but it's a very welcome addition to the mall. The phone brands that have been since there are Sony Ericcson (wondering when it will change the tarps to Sony Mobile), an Apple store, and the local brands.

Looking forward to test every HTC unit released on the market? The HTC store has a dizzying array of everything in it, from the Desire S to the Explorer. Fancy a Nokia? The Nokia store has its doors open for you. For Pete's sake there's even a Lenovo store in there (but they have no phones on display yet. Only netbooks and laptops). 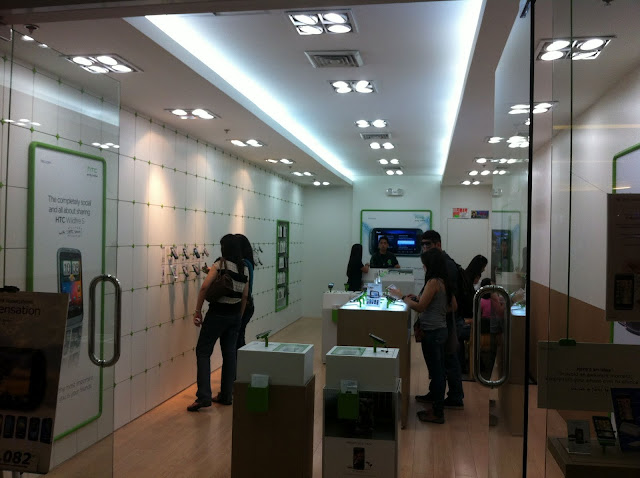 The HTC Showroom Store
If I recall correctly, I didn't see any (excluding other manufacturers such as Orange and Vodafone) LG or Blackberry showroom at the said area. Motorola has a small square booth which sells Defy and DROID Razr handsets though, proof that this market player isn't serious yet in penetrating the diverse Philippine mobile market. Don't let me even start on the ubiquitous Cherry Mobile store.

Didn't take much pictures because, for starters, I was unannounced, and snapping pictures without some sort of heads-up could be taken as rude or worse, I could be mistaken as a pervert.

Check out the official phone brand showrooms if you have some time to waste.

Now, if they only have some sort of blogger corner where we can loan phones to review.