I recently told the Twitterverse that playing with a PSP feels very primitive. The PSP-2000 is at least five years old, the older model has been around forever, and the Go is nowhere to be found. I have nothing against the machine though; I've played it to hell and back and it's still alive and kicking (you gotta give it to the Japs. They build things tough). It's a very respectable device that will go down the annals of history.

But then Sony got an idea: What will come out if you mix the form factor of a PSP with the touch sensors and camera of a Nintendo 3DS and the display power of the XBox 360? Simple. The Sony PlayStation Vita.

This is a 3G/WiFi bundle (approx. P19,000.00. The price depends on the bundled game). Inside the bundle box is another box which contains the PSV unit, and a carton placeholder holding in place the bundled game card and a proprietary 4GB memory card. 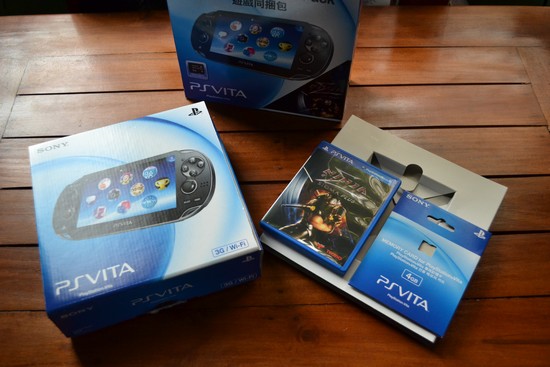 Inside the PS Vita box is the PS Vita (wrapped in a protective material), two quick start manuals (different languages), an operations manual, and a charger set. 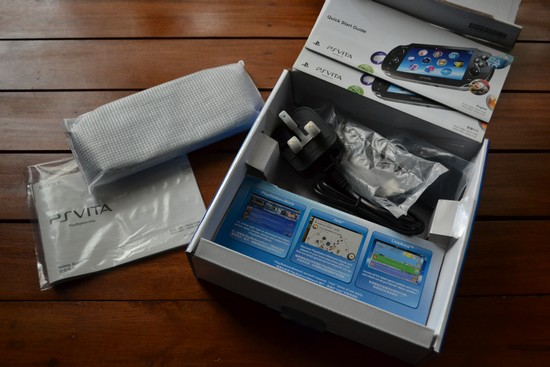 The Quick Start manual would tell you how to operate the PSV without going over the deep details. It also tackles the card slots you have on your Vita.

One thing Sony learned from Nintendo is to retain the shape of the original handheld. As you can see the PS Vita also carries with it the super-oval shape feature that is also found in the original PSP. At 182mm x 83.5mm x 18.6mm, it more or less has the same thickness as the PSP-2000.

The eye-catcher in this device is certainly the 5-inch OLED capacitive touch screen and its catchy new interface. Sony decided to scrap the old XMB that's found both in the PS3 and the PSP for a bubblier and jigglier UI. It's a feature you can identify a mile away. 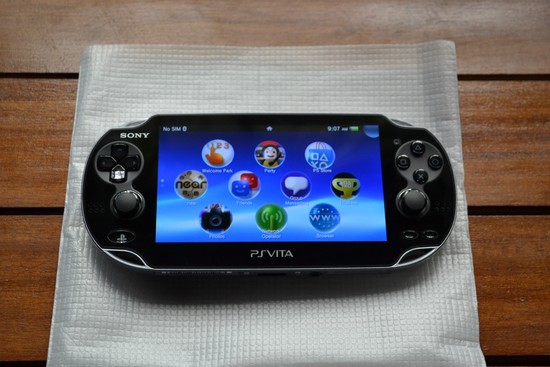 The whole unit itself has integrated touch screen controls at the home screen. You can "peel off" menus, swipe them to the side, or just simply press the PS button for quicker navigation. At every press, there's a Nintendo-ish sound that chimes off. I'd like to think of it as 3D sound, especially when you're in headphones.

The nubs seem to be made from the same material as the nubs from the PSP, although it has a lot less surface area now. It really is designed for the thumbs. And unlike a PS3 controller, you can't press on the nubs i.e. there are no L3 and R3 controls here.

The PlayStation Vita screen is made of a plastic or glass composite, but it's no Gorilla Glass. The advantage of this is the screen will not fill with crack veins if you accidentally drop your unit. Disadvantage: Scratch-prone. And I suggest you get a screen protector immediately. Your screen will fill with fingerprint smudges if you don't. Plus the fact that visibility will become poor. And yes, the screen area itself extends to the physical buttons. Better be careful when playing with the Vita if you want to keep it looking like new.

The front camera is very conspicuous, in an awkward kind of way. It's a 0.3MP camera (similar to the Nintendo DS), and it's no 808 Pureview so don't expect too much. Something's better than nothing right? Imagine if Sony decided to install better cameras. This thing would blow over $299. That I assure you. 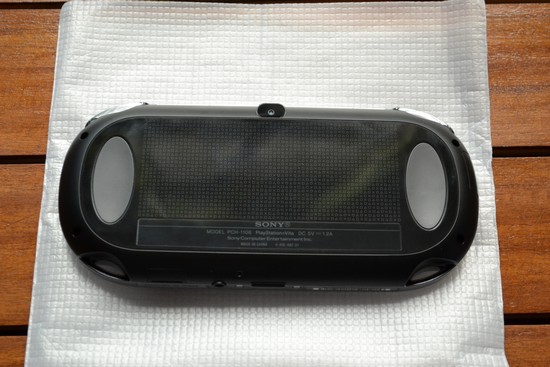 At the back of the Vita is the controversial touch pad. That area with the

pattern is where the magic happens. Like the front screen, it's also prone to smudges. Wipe it clean with a cloth once in a while because leaving it smudged and dirty might affect in-game control precision. This is also where common sense tells you to not place your unit just anywhere i.e. place it on a clean and flat surface. Once you play over the welcome tutorial you'll master operating the rear touch interface. The two gray ovals over there seem like grip holders. And lastly, the second 0.3MP camera at the rear. 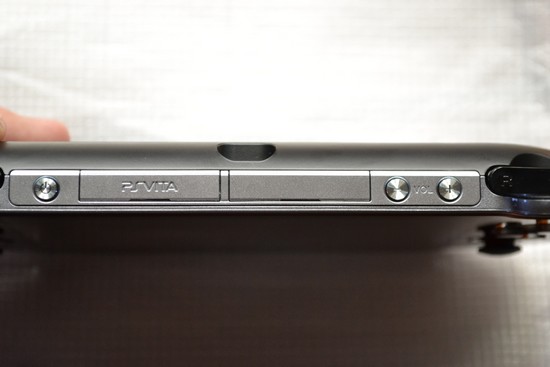 The top of the unit looks like Sony took the iPhone 4's volume buttons and slapped them on the Vita. And personally I like it that way, it looks clean. The two slots over there are flip over covers similar to the PSP's memory stick system. The left one is for the PS Vita card (your UMDs are useless now), and the right is the SIM card slot. This is the 3G unit after all, though I haven't tried inserting any SIM yet. Word is, Globe's the only network that would work on the PS Vita. If you go WiFi only, you'll find an accessory port instead.

The Proprietary Memory Card and the PS Vita Card

Sony is known for making proprietary technology. Sometimes it's or the good, sometimes it's just to piss people off. And here's what pissing a lot of people off: Sony made a special memory card (left) just for the Vita. You can't use it on your camera, you can't use it on your phone, you can't use it nowhere aside from your P Vita. And the worst part is, a 32GB Vita MC will set you back $100.00. That's 33% of a 3G/WiFi PS Vita's selling price. They may have done an all new memory card format to avoid piracy or whatever, but still, pricing a memory card with such an obscene amount gives me the apes. 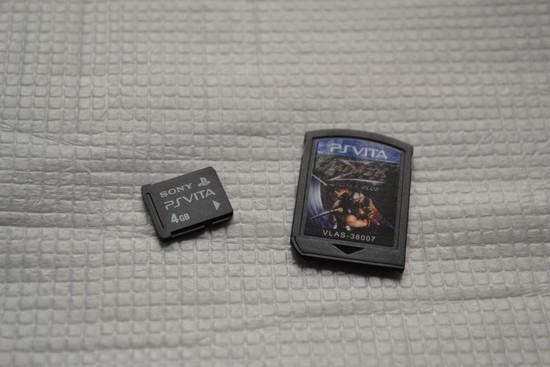 Another feature that separates the PS Vita far from its predecessor is Sony's decision to dump the UMD for the smaller, more mobile Vita card (right). I'd call it a cartridge, but people keep calling it a card. Anyway, I don't know how many gigs of data one card can hold, but with the quality of the game I've been playing so far, I'd say it's about 3GBs or more. Remember that the maximum size a PSP game can contain is 1.6GB (correct me if I'm wrong), that's as big as you can get. That's why there were some 2-UMD set games later in the PSP's life, because they went over 1.6GB. Then again, 2-Vita card set games aren't a farfetched idea.

The PS Vita packs a pair of quad-cores (a quad core ARM Cortex-A9 processor and a quad core SGX543MP4+ graphics processor) so you can expect it to handle everything in a pinch. Swiping, switching, and exiting applications are very swift, virtually no lag at all. Honestly I have yet to experience it lag. Heck, my PS3 seems slower compared to my Vita.

WiFi connection activates automatically once you decide to browse the internet (the browser UI is somewhat confusing). And like every capacitive touch screen out there, the PS Vita also features pinch and multi-touch controls. Unfortunately I can't say anything about its 3G feature because I've yet to test it (and honestly I doubt if I'll ever be able to test it). 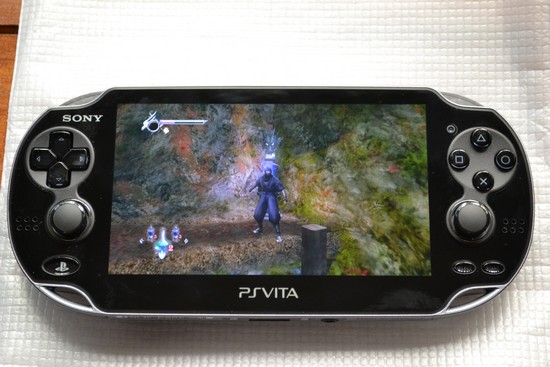 Gaming with this portable beast is as equally impressive as its two quad-cores. It shames the likes of Infinity Blade II (played it on the iPhone) or whatever Nintendo has in store. Bottomline: The PS Vita has the best graphics display in a portable hands down, and all this coming from a guy who owns and plays with various current-gen gaming media. Then again, the XBox 360 or its bigger brother the PS3 can one up this mini monster, but not by a big margin.

The touch screen and rear touch pad are very receptive. No need to tap hard since a very light touch would do. The only time you'll get difficulty managing the touch controls is when the screen and/or pad are full of smudges since it would now be very sticky. If you can afford a plastic film protector, cool. Otherwise, and as I said above, wipe it with a cloth every now and then.

What I'm worrying about though is the interference a gamer would experience when faced with a game that integrates the rear touch pad. Constant unconscious finger movement at the back will surely degrade the game's experience.

I have yet to face games that feature the tilt control (Sixaxis motion sensing system), but I'm pretty sure it'll work out fine.

The PS Vita plays most music formats out there, FLAC not included(I dunno what gives, since this is supposed to be a next-gen console). The stereo speakers sound normal to me, but then again it has something to do with the quality of the music file you're playing.

Video playback also isn't a problem for the PSV. You'll also be able to rent or buy movies through the PS Store or Netflix, considering you have the necessary prerequisites to download. I'm unsure if it can play .mkv files at this point though.

With all the power the Vita packs, its Achilles' heel is its battery life. I played mine on default screen brightness and maximum sound and it lasted more or less four hours. Charging seems to be a jiffy though (or it could be just me not paying attention). Of course I know that you know that you can extend the PS Vita's battery life by decreasing brightness, turning off connectivity, and minimizing sounds. You can get at least an hour or two more if you'll do that. Anyway you'll be getting about the same juice as with any other handheld console or smartphone. Basically there's nothing new here so read on.

Unlike the PSP, you can't just simply remove the PS Vita's battery. To get it you'll need to open the whole unit, and we're not even sure if you can do it that way. Keep in mind that the earliest CFW mods of the PSP came from tinkering with a battery they called Pandora and a process known as flashing. So maybe Sony's putting all the security defects of the PSP into mind while creating the PS Vita. 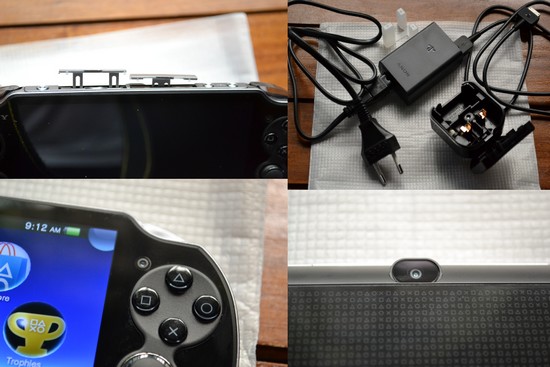 If you're seriously sick and tired of playing Angry Birds, get a PS Vita. No, honestly, if you want a serious gaming device that the big boys are playing, forget about all the iStuff, forget about the green alien robot, and fix your sights on the Sony PlayStation Vita. This machine is a no bullshit device that would let you in on portable gaming experience like never before. At its core, it's really built for serious gamers. I mean, really, who builds two nubs for a handheld console? Only serious people that mean serious business.

The PS Vita's additional features should also not be discounted. With Twitter, Skype, Facebook, and Foursquare, you can "serious game" while you "serious social," all within a few swipes.

It may be expensive, but it rightly should be so. Its pricing is justified because of the premium experience it delivers. Fanboy or not, this is a gaming device every gamer should have. And that's why my brother's getting one too on his birthday.

Special thanks to my better half for this wonderful device.