Globe Telecom, the country's second largest communications provider, recently held an intimate meeting with the press to show their accomplishments and claim top dog status with the recent NTC memorandum, showing the nation what network performs most.

The National Telecommunications Commission (NTC) conducted a network benchmark test comparing different quality parameters strictly for Globe and Smart. Other brands such as Sun, Talk 'n Text, Red Mobile, and Touch Mobile, were excluded from the tests. And according to Globe, their Legacy Network outperformed the competition and scored even with other metrics.


The NTC benchmark was conducted in the second quarter of this year in key cities in the metro, using only prepaid SIMs from both networks with a sample size of thousands.

If you can recall, Globe has announced earlier this year their $700 million network modernization program, which is more than 50% done currently, and is rolling out faster than expected. The company expects the program to be completed in early 2013. 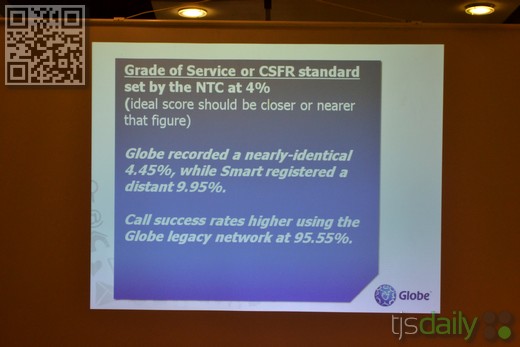 Meanwhile Smart, the network's biggest competitor, is claiming the top dog spot as well. Until the NTC definitively clarifies its statement, people from the industry are holding their breathes on who's really who.

What do you think of this potential network fiasco? Is Globe Telecom on the right, or have they misinterpreted the NTC data heavily as Smart is claiming? Comments below.