With cheap but powerful smartphones pouring into the market at every angle every month, it's not surprising that people are holding off their purchases to wait for a better release. Well, one smartphone might end all those held purchases because it truly gives the bang for the buck—the MyPhone A898 Duo.

The MyPhone A898 Duo is a sleek Android 4.0 Ice Cream Sandwich device that sports a 4.3-inch IPS display and a 1GHz dual-core processor. The kind people at MyPhone Philippines provided us one and it has been an awesome ride. Read our MyPhone A898 Duo review below, especially if you're looking to purchase this mean machine for the coming Christmas.

The MyPhone A898 Duo upfront looks like something from Samsung. The glass, the plastic, the contours, it spells Samsung all over. It can pass of as a Galaxy Nexus or a Galaxy SIII when viewed at a distance. 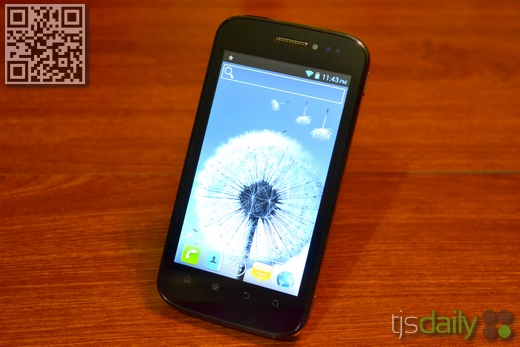 The MyPhone A898 Duo sports a 4.3-inch capacitive display at its face, which is close to the new 3.5-inch nowadays (4-inches being the new 3.5-inch). The four standard haptic soft-touch buttons are also present, and so are a LED indicator, a front camera, and a light and proximity sensor.

Meanwhile, the rear side of the MyPhone A898  features its 5-megapixel shooter and dual-LED flash. It's not every month you see a dual-LED flash-equipped Android.

The camera is oriented at the right side, lined by a chrome bezel, and is elevated from the body, presumably to make room for more parts inside. The dual-LED flash, although not bright as other Android flash units I've seen, makes up for spreading the light around the image, not directly into it. 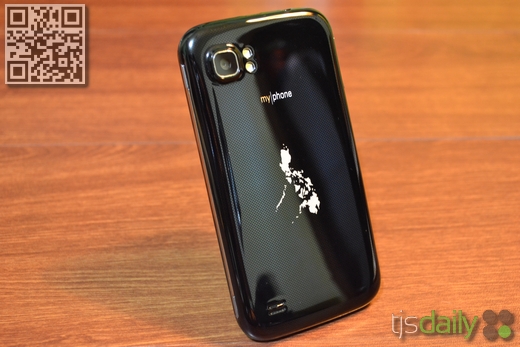 The speaker is aligned with the camera, but is located at the lower portion of the body. Regarding the speaker design, two-grills are the what's fashionable today. I've seen it in quite a few local Androids.

The MyPhone A898 Duo's back plate itself feels of premium flexible plastic, not the cheap brittle ones that's used on lower models. It has a black to charcoal black pattern, complemented by the map of the Philippines. In my personal opinion though, the company can do away with the Philippine map for a more cleaner, sleeker look.

The sleep/wake button is placed at the upper right side of the device, the placing of which is surprisingly very comfortable on the hand. Then again, sleep/wake button placements may be relative to a device's size. 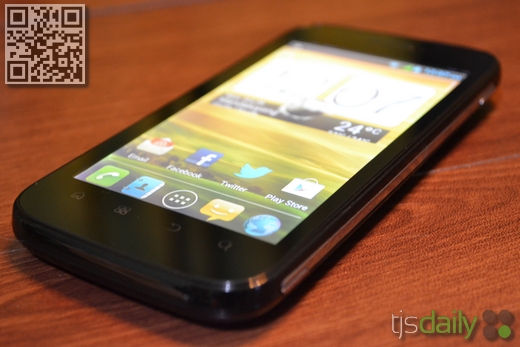 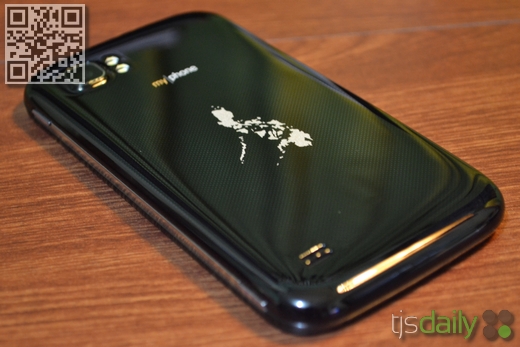 Directly below of the sleep/wake button is the light up button for the haptic soft-touch buttons of the MyPhone A898 Duo. Lastly, at the left side of the device is where the nondescript but perfectly blended volume rocker is found.

The MyPhone A898 Duo sports a 4.3-inch IPS capacitive display, a display size I found very fitting for the device. Unfortunately, the resolution of the display itself falls short on 480x800. It doesn't mean though that you'll suffer pixelation on the device's display (~216 ppi). In fact, it's so competitive you can pit the MyPhone A898 Duo against international brands of its caliber and you won't notice the difference. 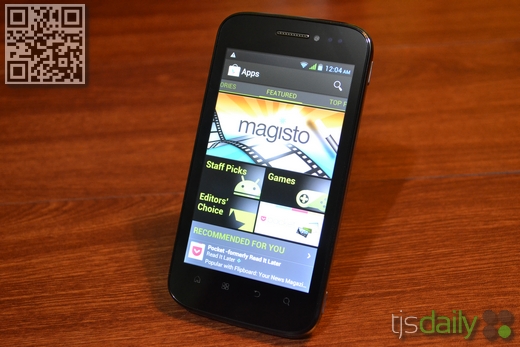 The advantages of having an IPS display also shows: 1) the MyPhone A898 Duo has no ghosting/trailing effect which is prevalent on large-display phones that aren't on IPS; 2) it has better viewing angles and is more resistant to sunlight, meaning you'll get to see more of the device's display even in sunny conditions and; 3) it produces color more vividly and accurately.

I use the messaging keyboard of Android phones to measure a device's touch sensitivity. Suffice to say the MyPhone A898 Duo met my display touch sensitivity standard and chances are it'd probably meet yours too.

I've played quite a couple of games with this device. More on this below.

Equipped with a 1GHz dual-core MediaTek MT6577 processor and 471MB of RAM, the MyPhone A898 Duo is very snappy. In fact, it's such a performer that it is right alongside international brands at benchmark applications. Here are the stats we took off of it.

The Quadrant Standard benchmark  ranks the device at 2671, making it sit pretty at third place, just over the Motorola ATRIX 4G and the Samsung Galaxy Nexus. 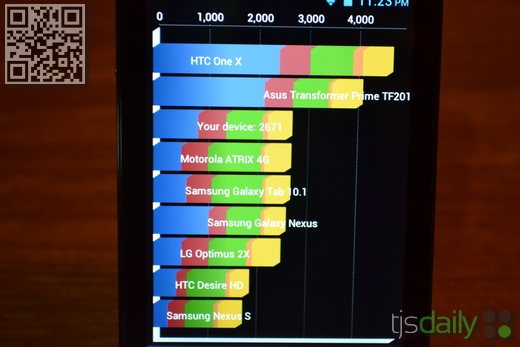 The more updated Antutu benchmark application places the MyPhone A898 Duo just above the LG Optimus 2X at 5548. At this point, if MyPhone decides to get a quad-core device with a good GPU, it'd be pretty much near the top. 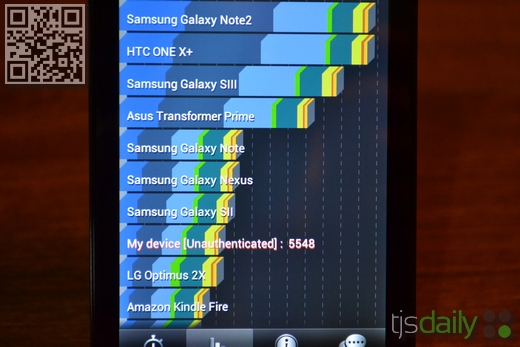 Qualcomm's Vellamo app gives the device a 1086 on the HTML5 test and a 352 on the Metal test. With a device bearing the given specs, the scores are just right. 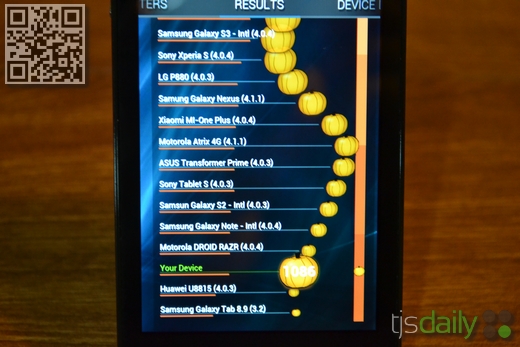 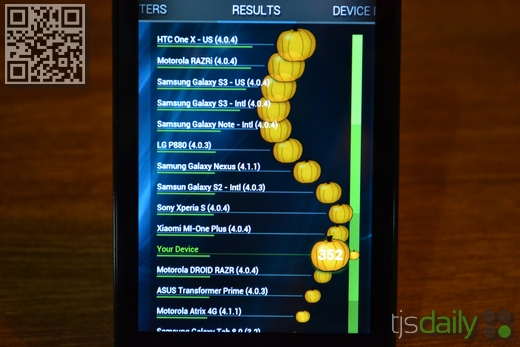 Interpreting the data from the benchmark tests, the MyPhone A898 Duo is one solid Android. Yes, it's powerful, but it can do more on some aspects.

On real life usage, there is no lag at all, and if any, it's barely, barely noticeable (I might be sounding biased here, but I'm not). Switching from app to app to the homescreen to the appdrawer with background apps, a live wallpaper, WiFi, and notifications on brings no lag. The MyPhone A898 Duo is truly a ground-breaking phone, albeit locally.

What do you do with a dual-core Android device equipped with a 4.3-inch display? Watch tons of videos on it of course.

The MyPhone A898 Duo completes the mobile viewing experience. With IPS on board and neat sound to boot, HD videos will pop-out as if you're watching it on a high-end LCD TV. In fairness to the brand, they've consistently outed products with good standard since the MyPhone A818 Duo. 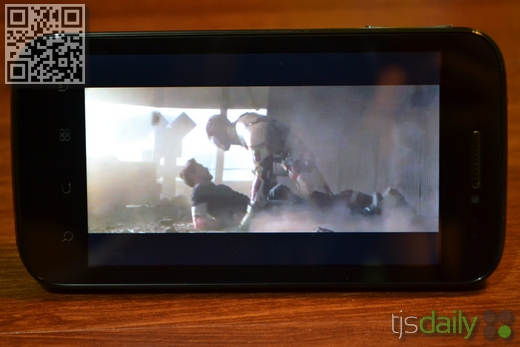 Regarding audio, the MyPhone A898 Duo plays sounds loud and clear (yes, it's not "canny"). Its speaker is pretty decent actually. You get to play tracks on it from bands such as Maroon 5 and Forever the Sickest Kids and the output is alright. Just don't expect JBL quality from it.

The MyPhone A898 Duo is microSD expandable up to 32GB.

One game that would test your smartphone's capabilities though is Dead Trigger. I installed it and played it, and the MyPhone A898 Duo met my expectations to no surprise. Loading times were neat, gun reload was fine, running past enemies were speedy. If you have a game to play, trust the MyPhone A898 Duo to be able to play it. 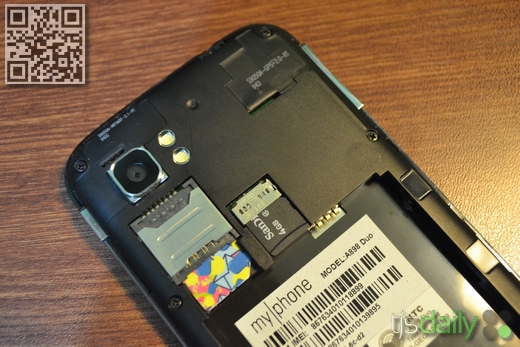 The MyPhone A898 Duo sports a 5-megapixel snapper, so expect images to be pretty standard. One thing I do like about the device though is its consistency in photos. Autofocus refocuses the lens quickly, giving you enough time to capture moments that would've passed away if the autofocus is one second too late. 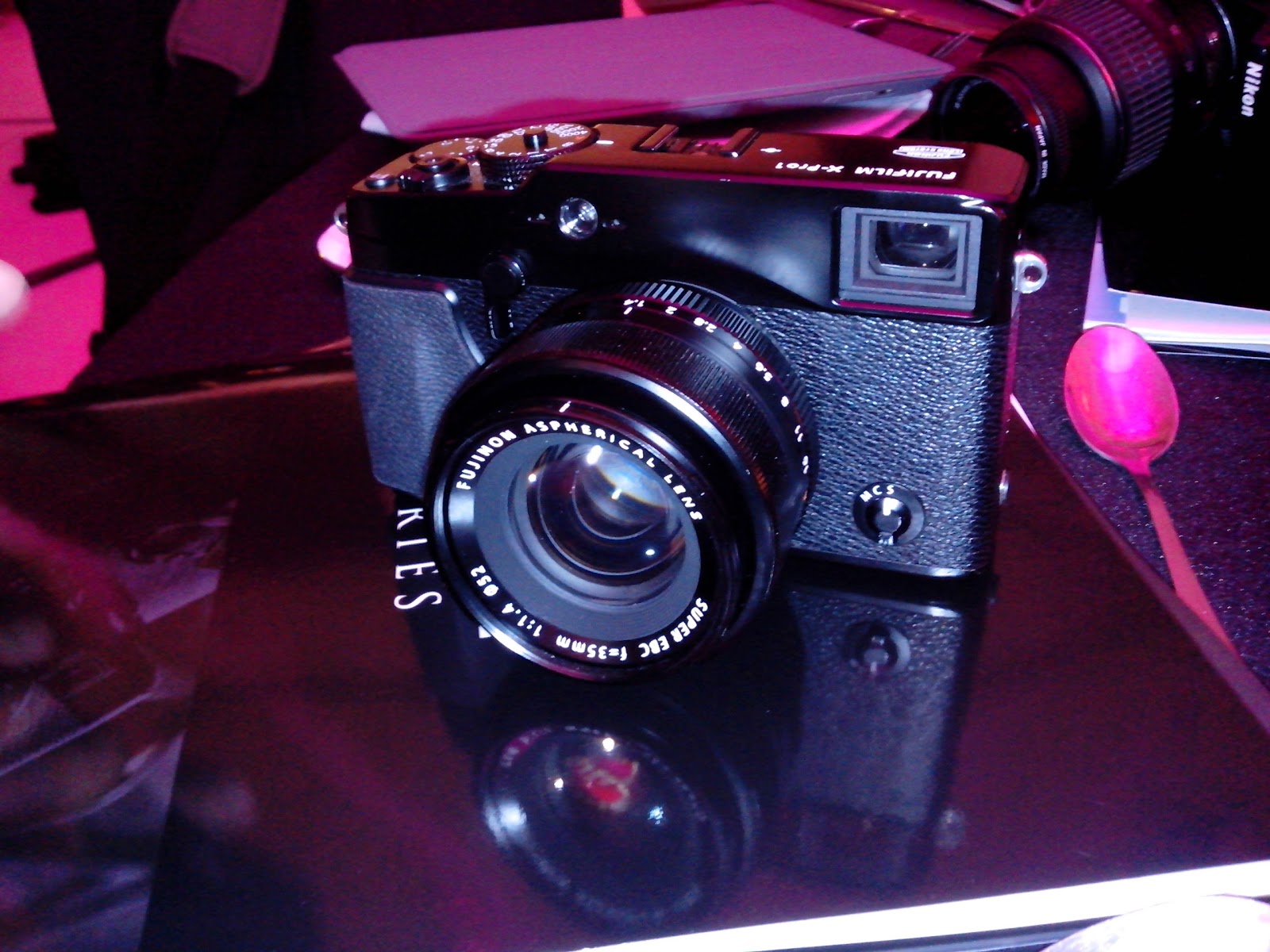 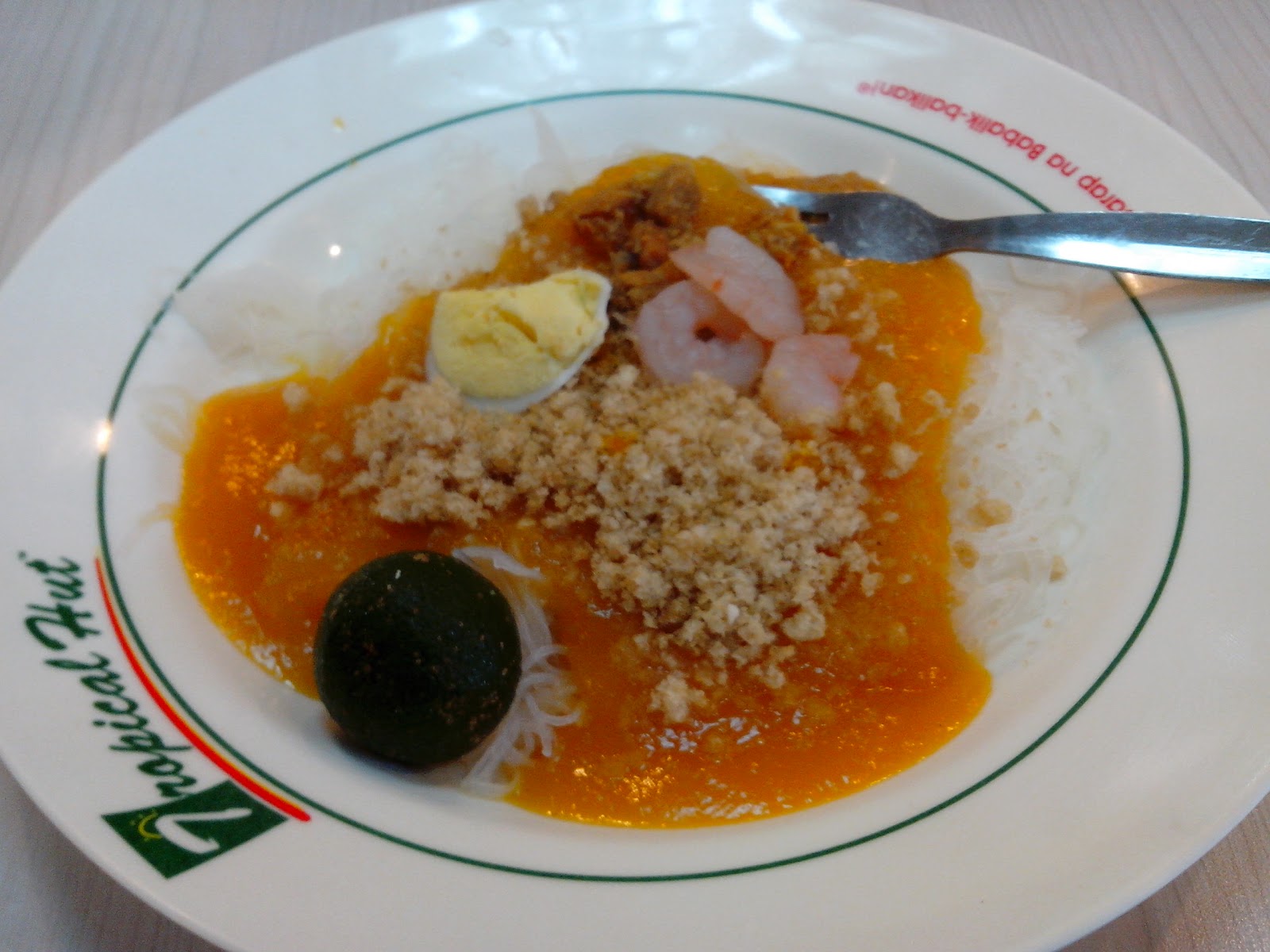 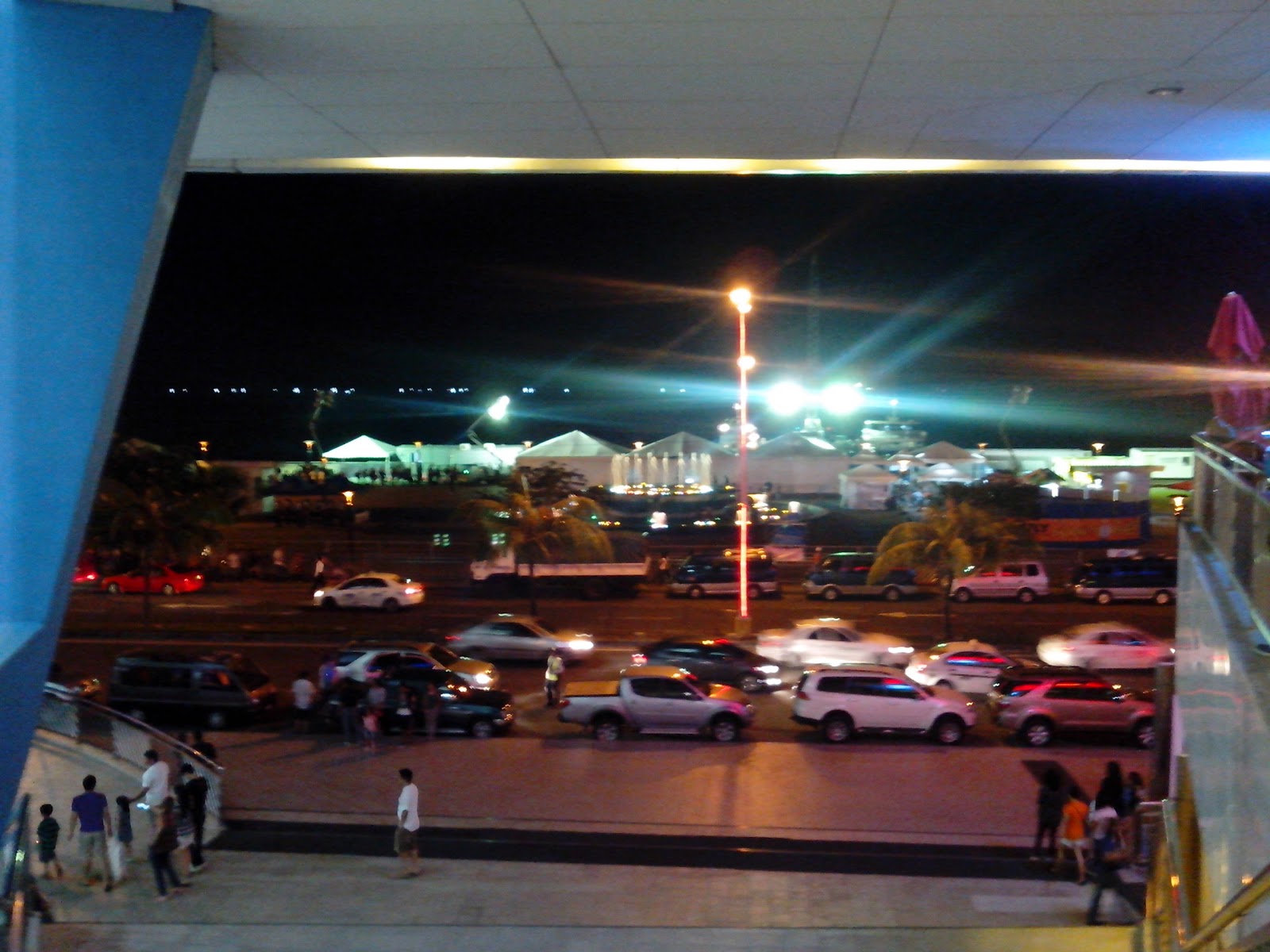 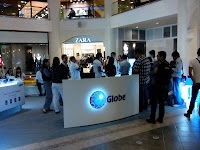 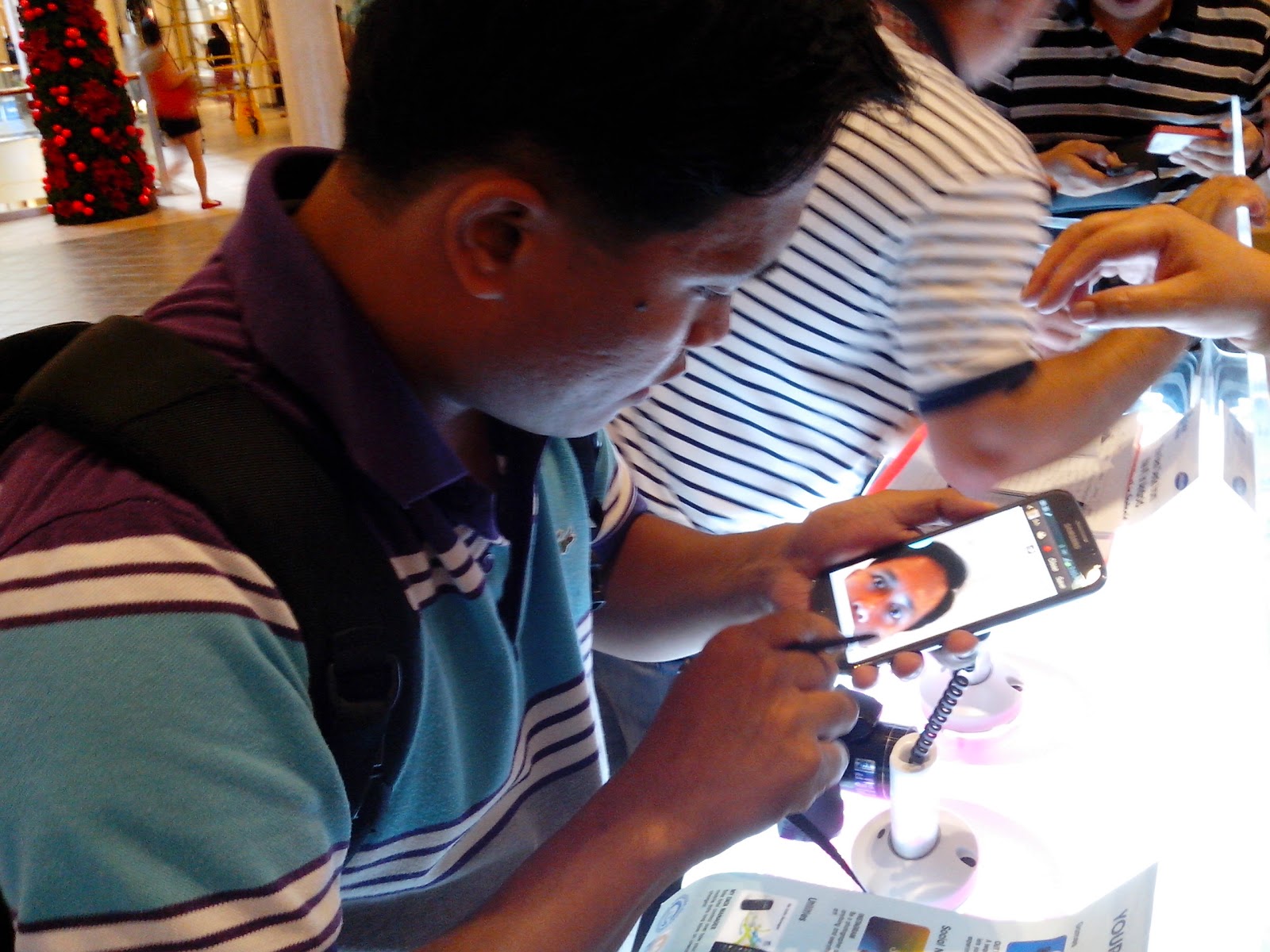 If you're not satisfied with the photos you've captured, use the native photo editor of ICS. Just tap on autofix, adjust warmth, and you're good to go.

The MyPhone A898 Duo's battery is rated at 1800mAh and is Li-ion. With regular use (WiFi, 3G, short bouts of gaming, all day texting, Twittering, Facebooking, Flipboarding, medium brightness, etc.), the battery lasts around 8 hours, which is pretty average nowadays.

The only thing I noticed about the device's battery is even if it's in full charge, its battery rating quickly degrades to 85% (1% every 30 seconds or so) and from then on stabilizes. It may have something to do with software, but I'm not really sure. 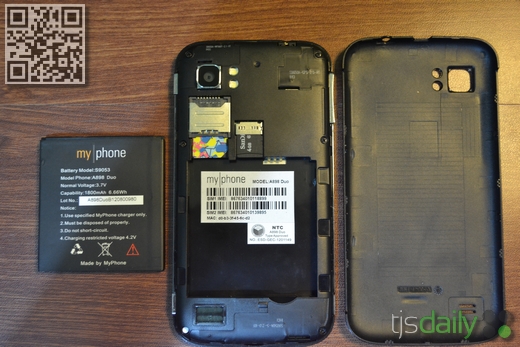 Charging time for the device (full charge)  is about 4 hours and 30 minutes give or take.

Using the MyPhone A898 Duo was a total joy: I got to surf the internet anywhere, got to see my tweets when I wanted to, and it was as snappy as I expected it to be.  The only thing that fell short was that little glitch on the battery (the 480x800 resolution isn't even an issue. The display is awesome). But if you won't mind that like I did, then I see no problem why you would not like this smartphone.

It may be structurally and internally similar to the MyPhone A878 Duo, but that's where the similarities end. The MyPhone A898 Duo has a front-facing VGA camera, 3G connectivity, and is a little more expensive. It's on sale now at PHP 7,499.00, a total bargain when compared to similar performing international devices.