Now here's an interesting story that every company in the world can pick something or two from.

A week ago, an unauthorized 90% coupon code for the UK Razerzone Store went viral (it was apparently a dummy code left behind by a third party to test the site's functionality). And as with everything that goes viral, Razer UK was completely overwhelmed with orders by people chancing upon an almost-free deal.

Here's the best part: Razer CEO, Min-Liang Tan, decided to honor almost all the purchases that used the 90% off unauthorized code. Here's what he said on his Facebook page: 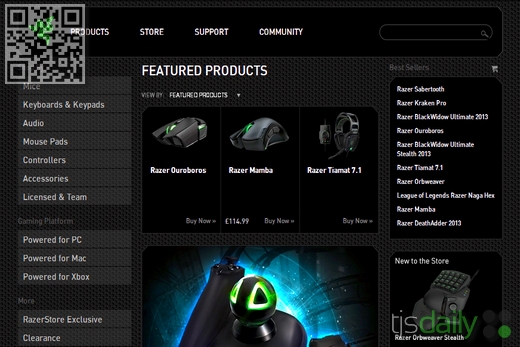 A few days ago, a coupon code that provided a discount of 90% off Razer products at our UK Razerzone store went viral and thousands of orders were placed in the space of a couple of hours. This coupon code was NOT authorized nor approved by Razer and was generated by a third party to test our shopping cart (and left in our system unknown to us till now). When we discovered this, we had to shut down our site for a bit until we figured out what was going on.

While we have the option of cancelling the orders legally, we’ve always had a customer comes first policy at Razer and in respect of this incident, we have decided to honor the orders that were placed using the unauthorized code by Razer fans buying single products for their own use. Unfortunately, as the products are being sold well below their cost, it will likely cost us an insane amount of losses to make good on the orders which will really really hurt us as we’re still a small company - that much said, we want to do right by the community. For orders in the multiples of units for a single product, we will still give each an opportunity to purchase one item of each product ordered at the 90% off discount but not for multiple units of the same product. Our focus is on doing the right thing for our fans, the gamers and the community, not for resellers or users to profit from this. That’s not gaming, that’s not our deal.

So that’s the plan. It’s going to take a few weeks (and up to a few months in certain cases) to get all these orders processed and shipped—a lot of stuff was already back-ordered due to high demand—and we ask that customers please bear with us. We apologize to anyone miffed or confused by this week’s happenings in the U.K., we appreciate everyone’s patience, and we thank all of our customers for their support. Game on…


This is not an Onion article. This is, in fact, very true. Razer UK stands to lose an insane amount of money by deciding to honor the said purchases, but they stuck to their guns and got out of their way to be the best company ever...this year.

Personally I'd wish to see this company prosper and become a giant in a few years time, provided they maintain this positivity. Heck, they could've cancelled all the orders legally for all I care, because it's their right, but they didn't, and I salute them for that. Hopefully Razer Philippines carries the same values.

Game on Razer. Game on.