Three of the features that communications-savvy people look for in today's smartphones are fantastic displays, powerful processing capacities, and dual-SIM capabilities. And that's provided it can actually fit in their budgets. That's where the Alcatel One Touch Scribe HD comes in.

Measuring at 5-inches, the Alcatel One Touch Scribe HD is Alcatel's first-ever quad-core device. Coincidentally, it's also the first-ever smartphone to be fitted with Mediatek's quad-core chipset (MTK 6589) It's almost everything you'll want in a smartphone—that's to say that there's no device in which you can find everything you want, yet. So without further ado, here's our Alcatel One Touch Scribe HD review.

The Alcatel One Touch Scribe HD—at least for the black version—is akin to a stealth tank. Its slate form combined with the smooth rubberized coating contributes to such appearance. It also gives you that premium feel and confidence at first glance, enough to give you that "Ah, this is a quality device" feel. 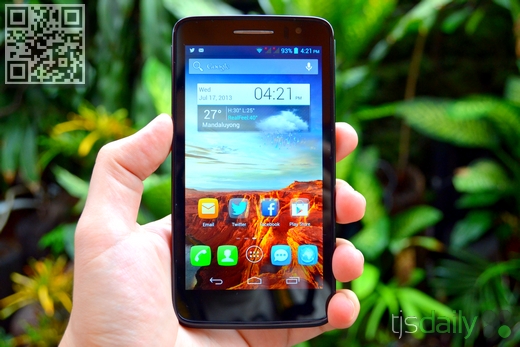 The front of the device boasts its gorgeous 5-inch full HD display, a pair of sensors, a front-facing camera, and a cleanly-mounted earpiece. The three-piece soft touch buttons are integrated in the display itself, a feature that seems to be gaining popularity with each installment of Android. 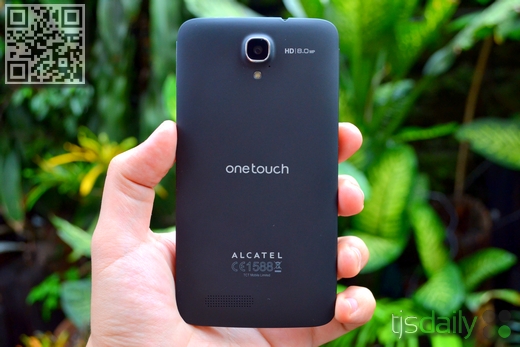 The backside of the Alcatel One Touch Scribe HD is where its 8-megapixel primary camera with flash is located (which unsurprisingly is also elevated from the body itself, similar with the Idol Ultra), a well-placed loudspeaker pocket, and a very smooth, clean back with the One Touch logo dead center of the device.

The top side of the device sports the 3.5mm audio jack and the chrome-finished sleep/wake button. Very near that on the top right side is the volume rocker and the microSD card slot (flap covered). The leftside meanwhile sports the dual-SIM slots (flap covered. Two micro SIM slots actually) that vary depending on the model you're getting. There's a version in which there's only one micro SIM slot, with the SIM flap prepped for two. Also on the left is the microUSB/charging port. 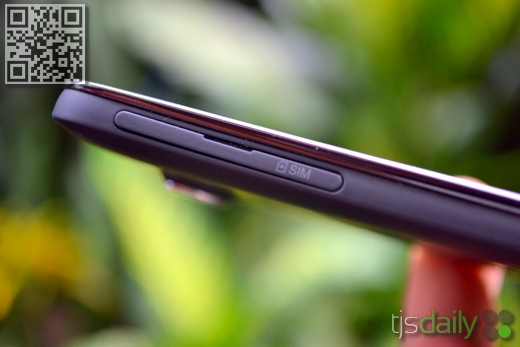 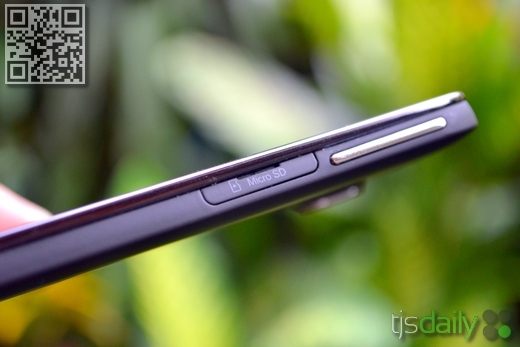 The Alcatel One Touch Scribe HD, as huge as it is, feels very light. No, really. You can even say that it feels hollow inside. It's that light. My Omega HD 2.0 is heavier than the former is, considering both almost have the same specs, except for the camera and the battery (the Scribe HD has a larger 2500mAh battery capacity). 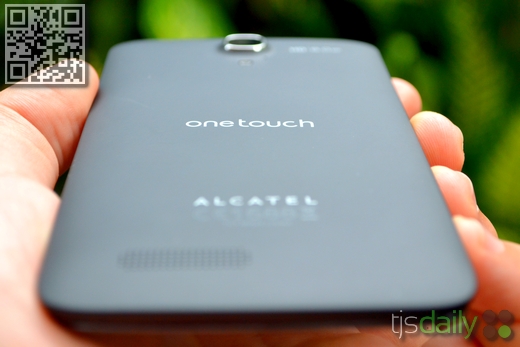 The downside to the device's lightness though is its wideness. It's a tad bit wider than most 5-inch premium devices nowadays, and it doesn't even accommodate its stylus (included in the box) the way a Samsung Galaxy Note 2 would, which would've been pretty ideal, especially when you're not keen of grabbing separate items just for a feature to work. Minor nuance aside, it feels great to hold on both hands, portrait or landscape. Your hands won't tire easily, the smooth back helps for a comfortable grip, and the device itself is still pocketable.

The Alcatel One Touch Scribe HD sports a 5-inch Full HD IPS capacitive display at 1280x720 resolution and ~294 ppi. It's one of the better screens I've seen on an affordable phablet and I trust Alcatel to not let this up on their future units. 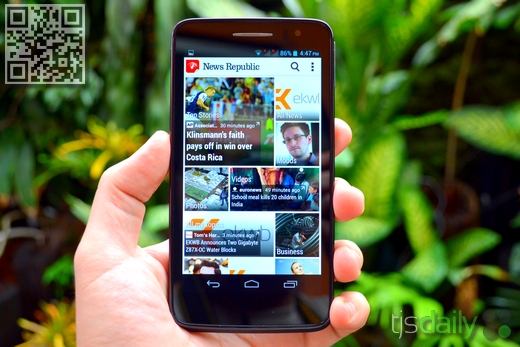 The device's display is very lively: Colors are superb and accurate, reds and blues reproduce properly, and there's not a different tinge at whites. The Scribe HD's viewing angle is wonderful all around, given that it's an IPS.

With regards to the interface, the Alcatel One Touch Scribe HD continues to use—for lack of better words—the Alcatel UI. At this point I believe a total UI overhaul would help the company achieve a better opinion of their smartphones, as the UI is a third of the battle (hardware and UX being the other two). 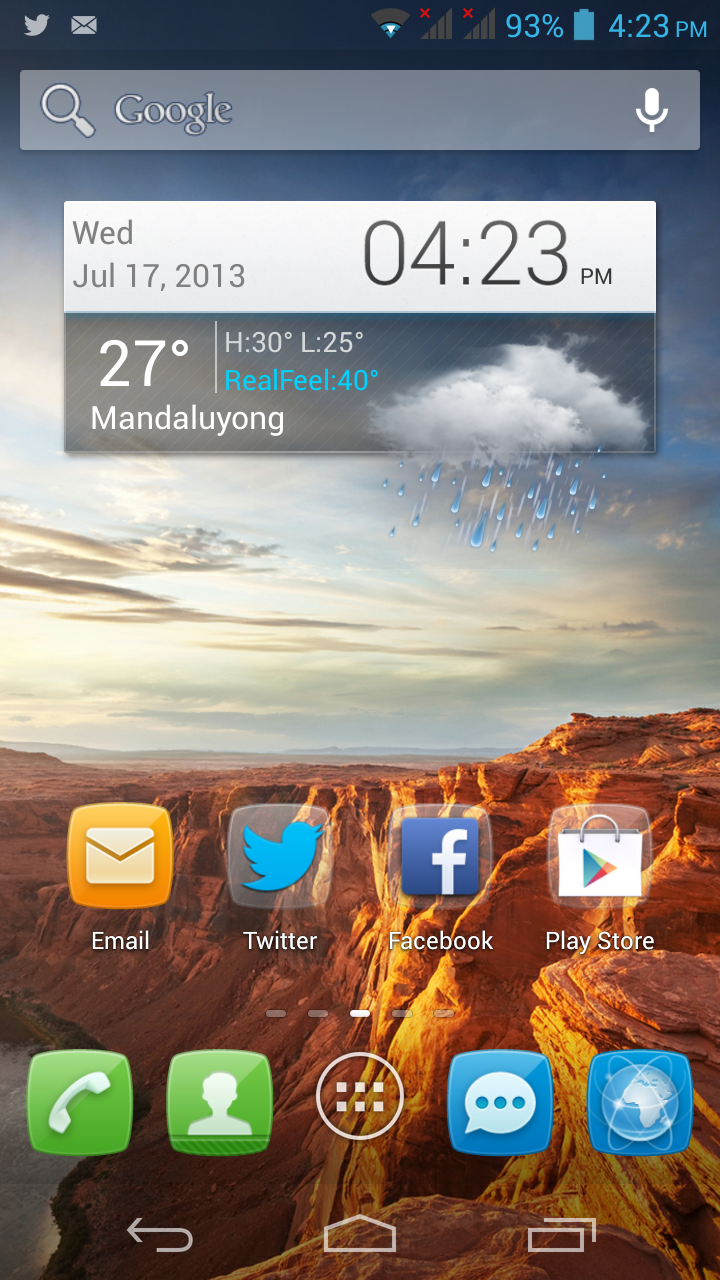 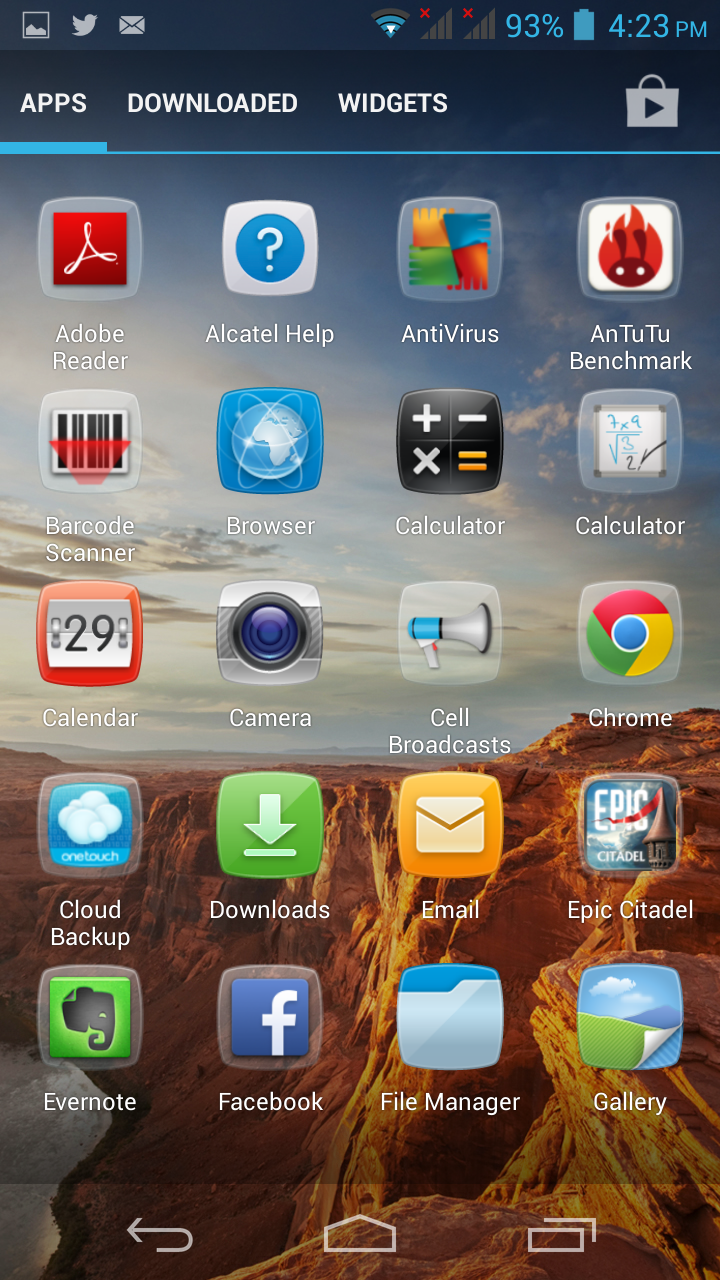 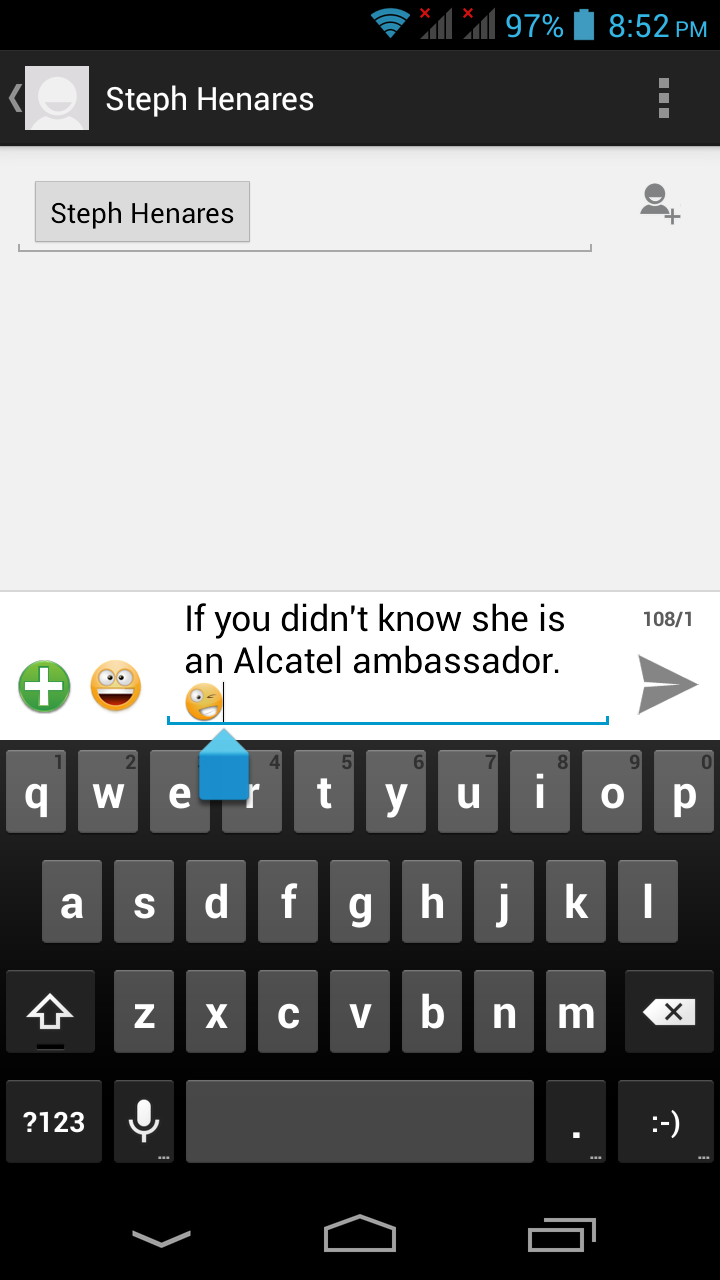 The Scribe HD multitouch feature maxes out at 5 points. The display itself is very responsive to touch and is accurate enough to not warrant multiple taps.

Lastly, the Alcatel One Touch Scribe HD is equipped with the Dragon Trail Glass technology. You might still need a screen protector, since the screen is a smudge magnet.

The Alcatel One Touch Scribe HD sports a 1.2GHz quad-core MTK 6589 CPU, a GPU, and 1GB RAM. Its hardware is identical to most local brands' flagships. The only difference is that Alcatel manufactured this smartphone themselves. Benchmark results below:

The Alcatel One Touch Scribe HD fetches a clean 12809 at the AnTuTu benchmark, just squeaking by the Nexus 7 by a few points. 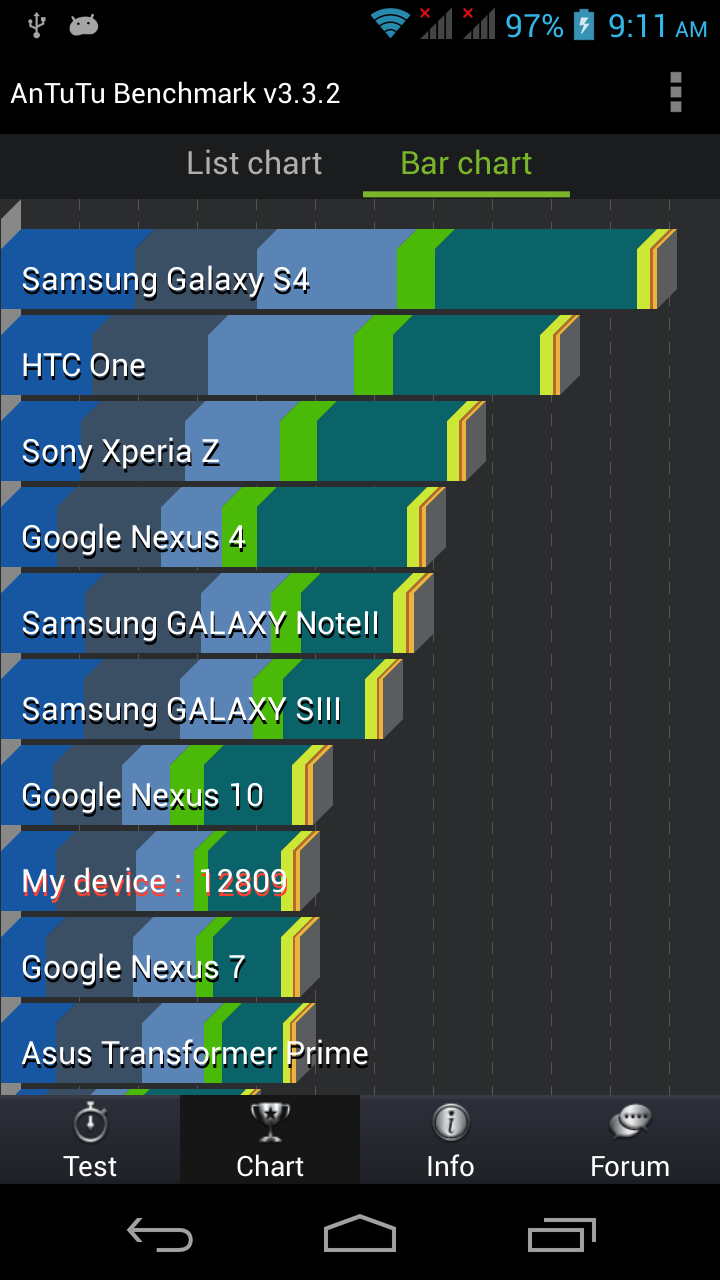 The device meanwhile is rated at 3899 at the Quadrant Standard benchmark. And just rightfully so, since MTK quadcores score in this range. 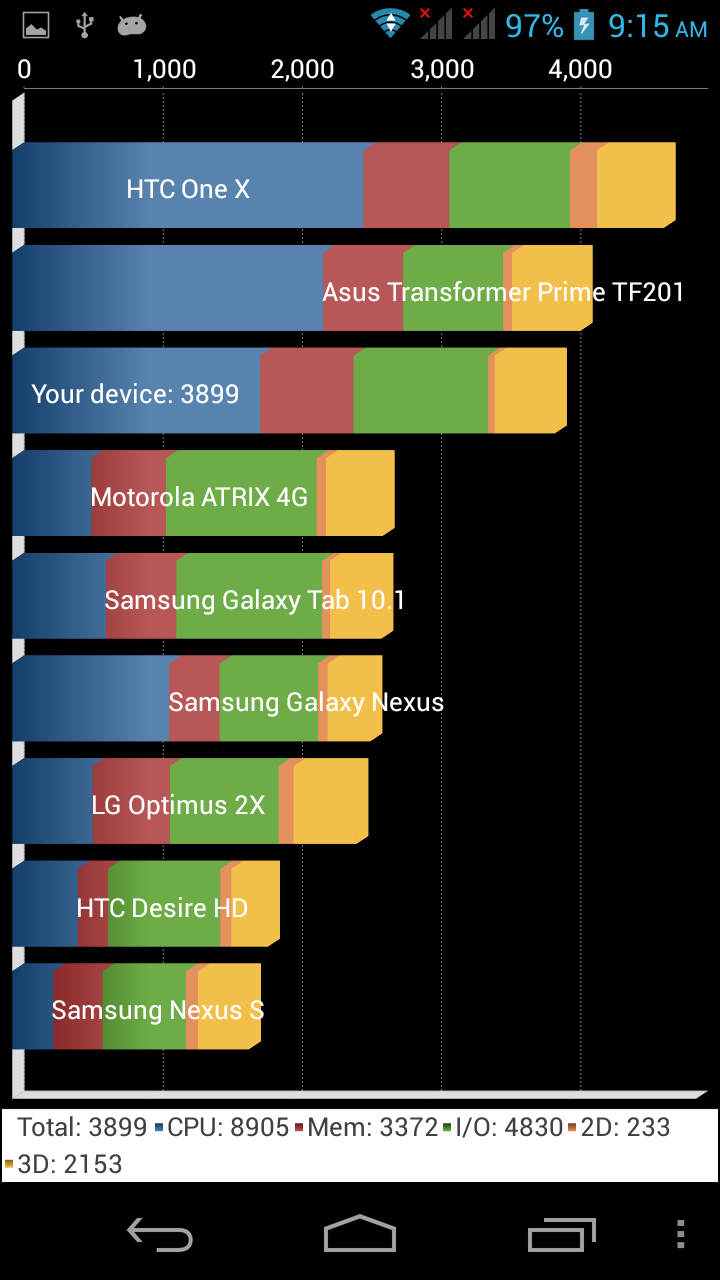 The Alcatel One Touch Scribe HD tops the PassMark benchmark in overall results at 2616, leaving the Prime TF201 in the dust (different benchmarks give different ratings). 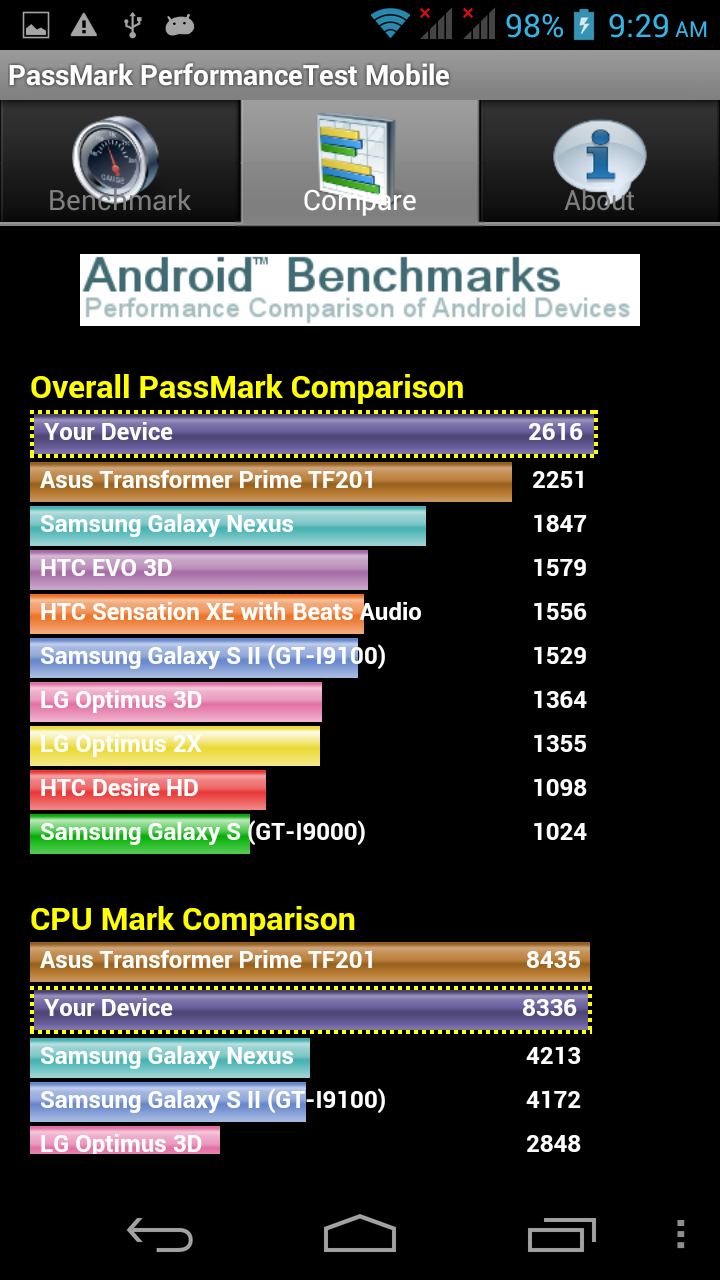 In Qualcomm's Vellamo benchmark, one of the more advanced benchmarking tools out there, the Alcatel One Touch Scribe HD fetches an above than normal 1465 for the HTML5 test and a 434 at the Metal test. It's just more than half of what an HTC One would probably score, but this device isn't even for comparing to that. 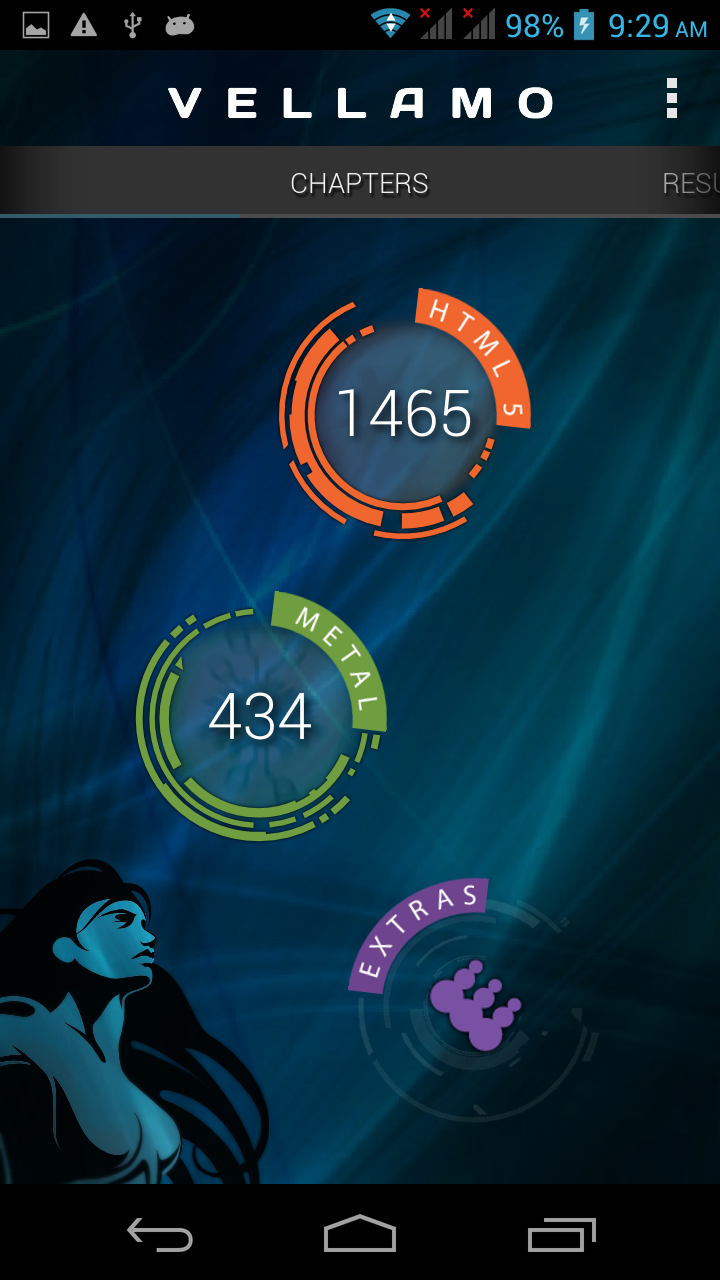 And finally at the Nenamark 2 benchmark, the device gets 45.7fps, a neat score as compared to other Androids bearing similar specifications (for reference, some get as low as 30 to as high as 42). 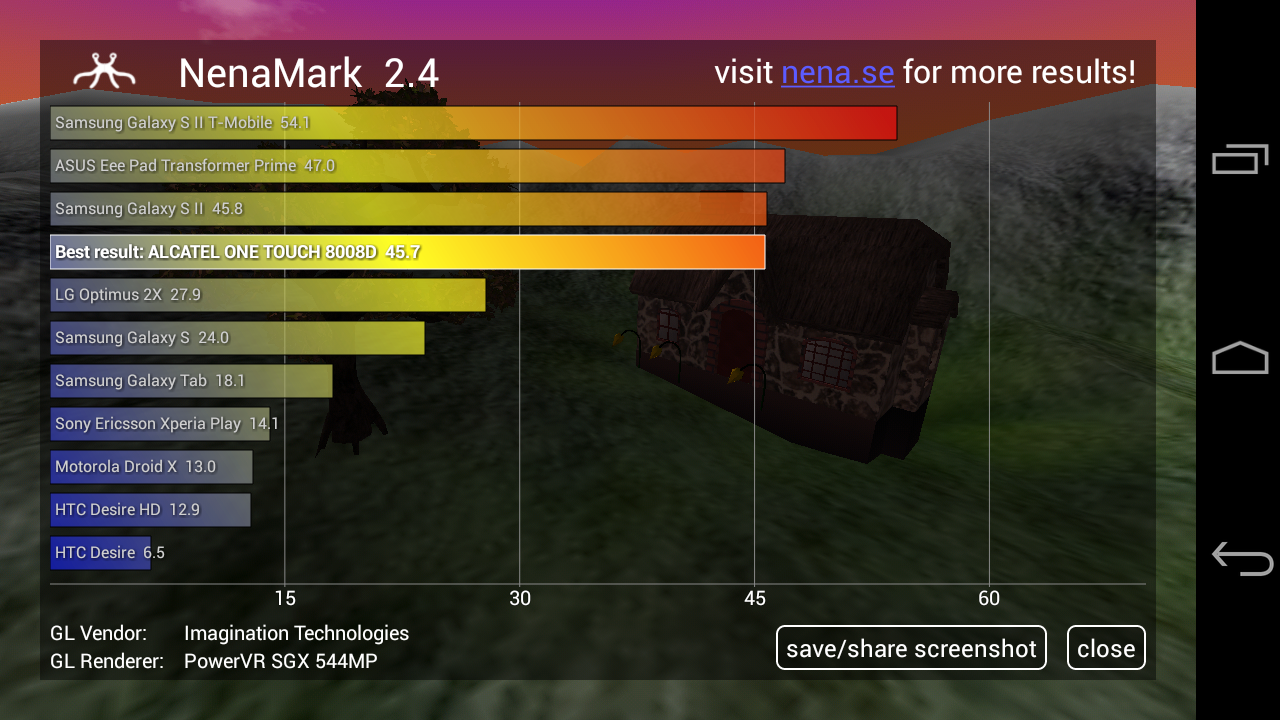 It may just be me being biased, but I strongly feel that this smartphone is faster and better optimized than its local contemporaries, but the point is arguable, and I digress. The device is also fast and powerful enough to run graphics-intensive games and applications, albeit with the occasional hiccup.

Real world usage: This device would have a moderately good time running everything you throw at it, even with notifications and background apps on while you're playing graphics-intensive games. You shouldn't even ask how it would perform in less-demanding environments.

Bearing a big HD real estate has its benefits, such as viewing clips and movies in all their HD glory. There are definitely better displays out there, but in my humble opinion the Scribe HD is one of the closest you'll get to a premium screen experience at an affordable price point* (this plus the Sharp Aquos Phone). 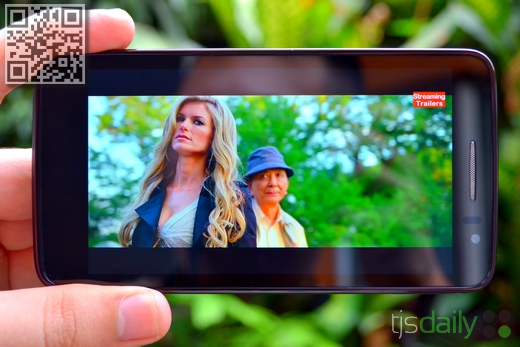 *I welcome the idea that there are plenty of others as well, but they're not in the Philippines yet.

Watching videos on the display—although it's by no means revolutionary—is still a sight to behold. No pixelation, smooth transitions, accurate color reproduction, in short the display is great. 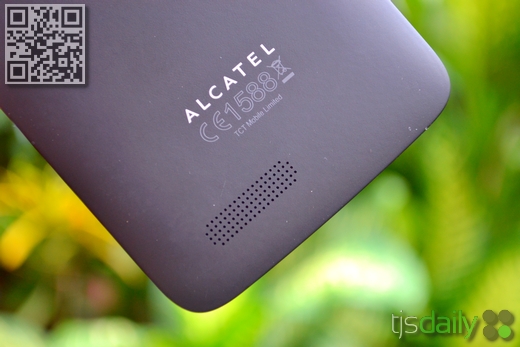 The loudspeakers of the device meanwhile, located at the back of the device with tiny dots for its grill (that look very gorgeous by the way), give off a muffled, somewhat cracking sound. Highs and mids are mostly present, but the lows seem to be missing, or if present, cracking. Didn't actually expect this to happen, since everything so far was well made.

The Alcatel One Touch Scribe HD, sporting four cores, a gig of RAM, and a good GPU runs games well. The device is definitely a bright spot relative to others in its range. It runs EA's Real Racing 3 and Minion Rush (yes, I use this seemingly innocent game as a benchmark because it makes smartphones choke) with relative ease. 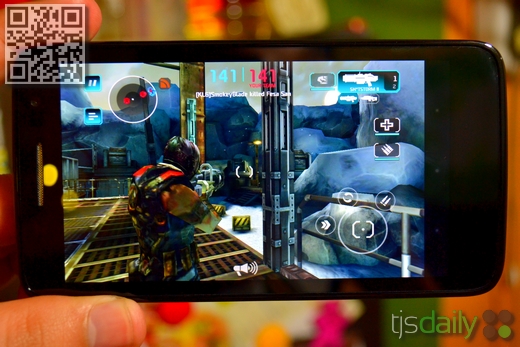 Shooters such as Dead Trigger and Shadowgun: Deadzone flow fluidly in the device. Put in the 2500mAh battery into the equation and you got a good gaming device that'll last you a couple of hours.

This Jelly Bean Android sports an 8-megapixel rear camera with AF and LED flash and a secondary front camera. It's equipped with native filters and detection features and captures images at 3264x2448 pixels. 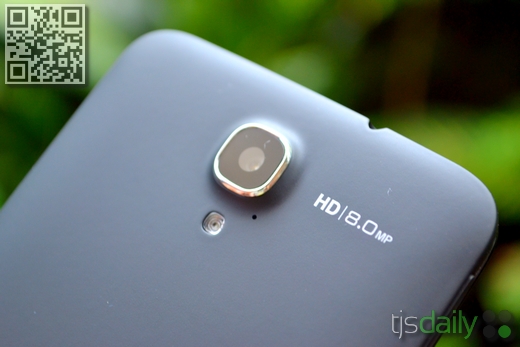 What's great about this device's primary camera are its quick AF time, its quick shutter time, and the photos itself. The photos are not as stellar as, say, a Nokia Lumia 925's, but it does the job wonderfully. Images captured are clear and crisp, details are well-reproduced, and noise are minimal, provided you do shooting at well-lit environments. Sample images below:

The Alcatel One Touch Scribe HD sports a 2500mAh non-removable Li-ion battery, with the non-removability due to the device's unibody feature. 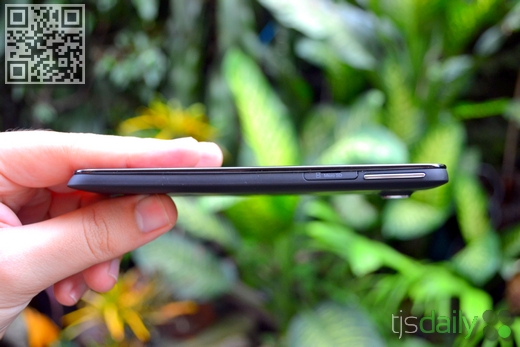 At 2500mAh, the battery makes the the Scribe HD one formidable device. Normal usage i.e. SMS, casual gaming, casual surfing, will amount to 14 hours before the juice goes bust. In heavier gaming, you'll get at least 5 hours.

The device will charge from zero to full in approximately 2 1/2 hours.

The Alcatel One Touch Scribe HD is equipped with value-added features such as a cloud backup offering (One Touch Cloud Backup, handy for restoring the device to a point in time), a dedicated notes app (Notes Mobile), a movie maker, an adventure tracking app, and a wireless keyboard feature. 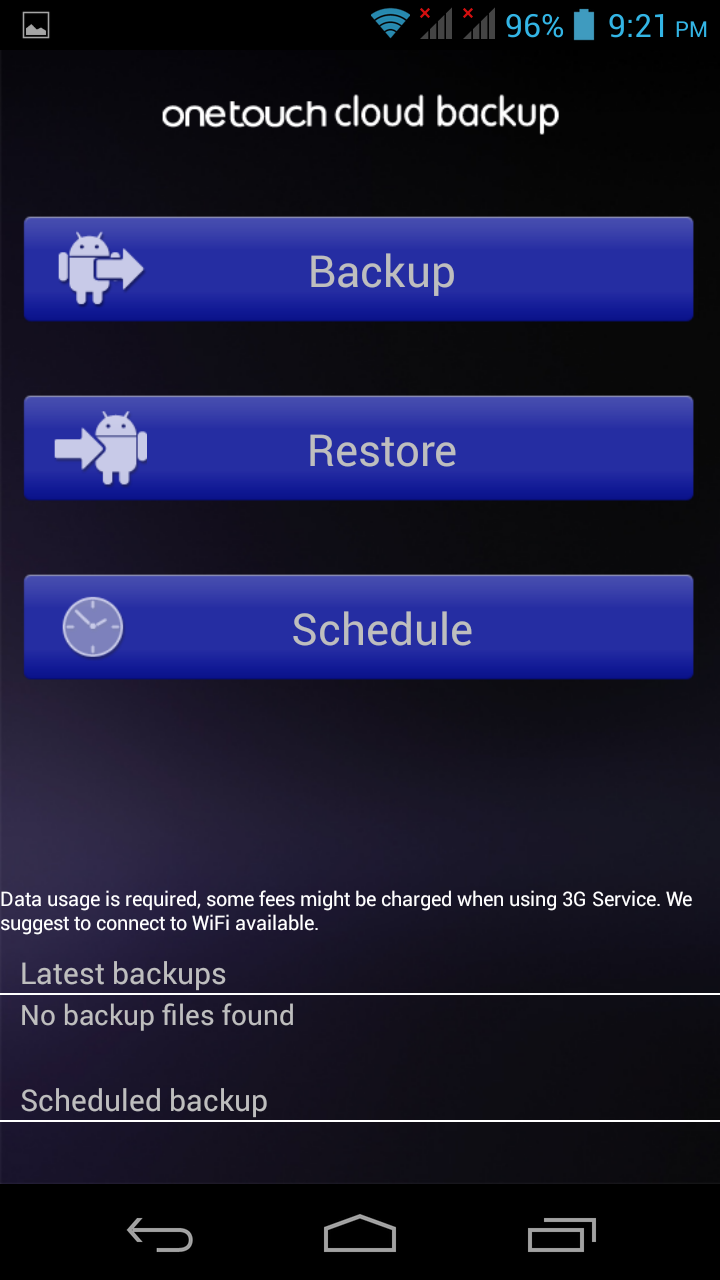 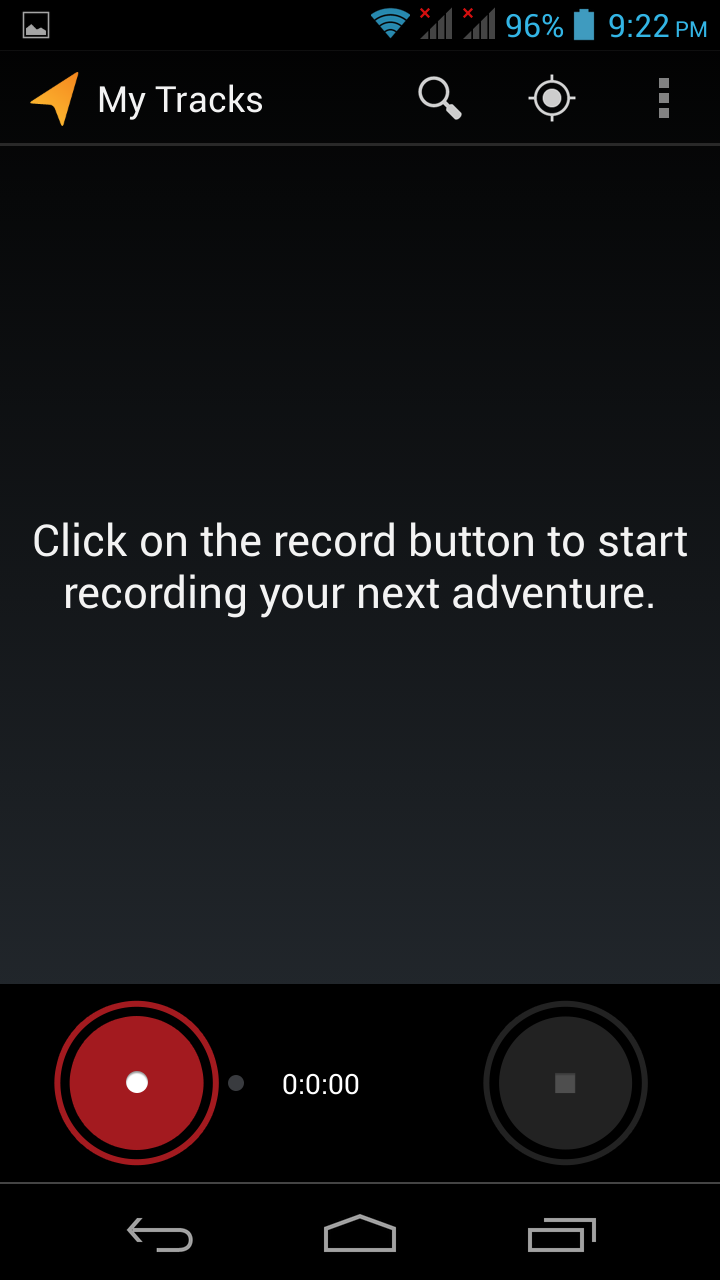 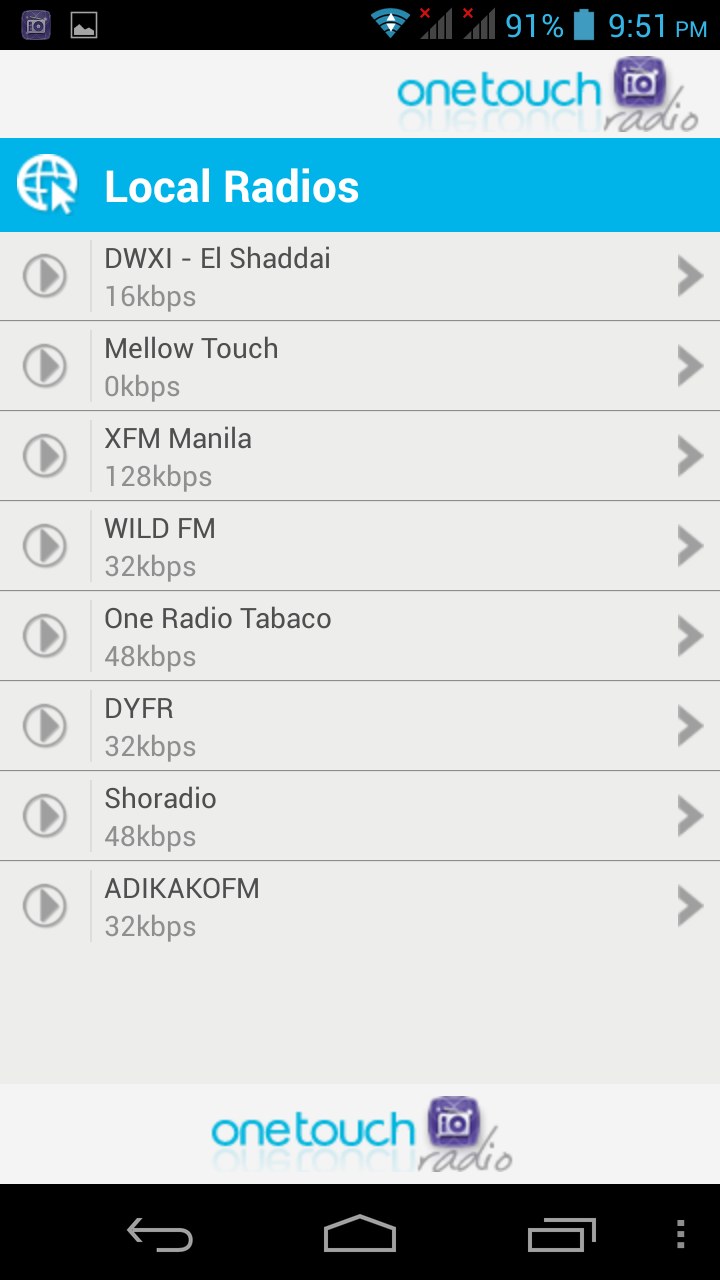 The Alcatel brand have been in the telecommunications business as far as I can remember. With decades of experience in their portfolio, they probably know what flavors the consumers are looking for at any given time. And although they've gone lowkey for quite some time here in the Philippines, they've played their cards right with the Alcatel One Touch Scribe HD. 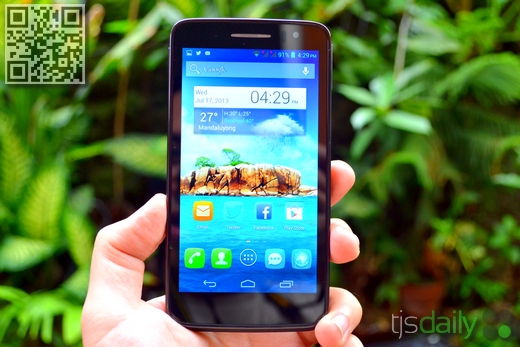 The Alcatel One Touch Scribe HD is possibly everything one is seeking in an internationally-branded budget smartphone: It has power, speed, above than average battery life, reliability, a clean design, a great HD display, a good camera, and a solid but perfectly light feel. The premium experience it delivers is only slighted by the loudspeaker it's equipped with (and I'm still wondering why that became to be). Other than that, and after factoring in other similar products available locally, I have nothing but two thumbs up for this device.

The Alcatel One Touch Scribe HD is now available in Alcatel kiosks near you for P13,490 (also available in installment).