Leading local smartphone brand Cherry Mobile recently announced their annual Festival promotion, wherein the company unveils new smartphones en masse, together with their existing products. And as expected, Cherry Mobile both threw in value for money and flagship Androids, a perfect example of which are their four new Omega devices, namely the budget quad-core Omega Spectrum, the Omega Aeon, the Omega Icon, and their newest octa-core the Omega Infinity.

Most noticeable among the new devices launched - attractive specifications and pricing aside - are the OS versions a majority of them are running on. As you can see, aside from the Gingerbread entry-level devices, every smartphone is running on 4.1 or 4.2 Jelly Bean. And from the looks of it, Cherry Mobile is keeping their flood and dump market strategy, wherein they flood the market with new smartphones and dump them on sale, without giving support for most of the devices released (and this is amidst continuous consumer clamor for updates and such). They recently updated the Cosmos Z2 to KitKat to their credit, though it would be nicer if it was 4.4 out of the box. 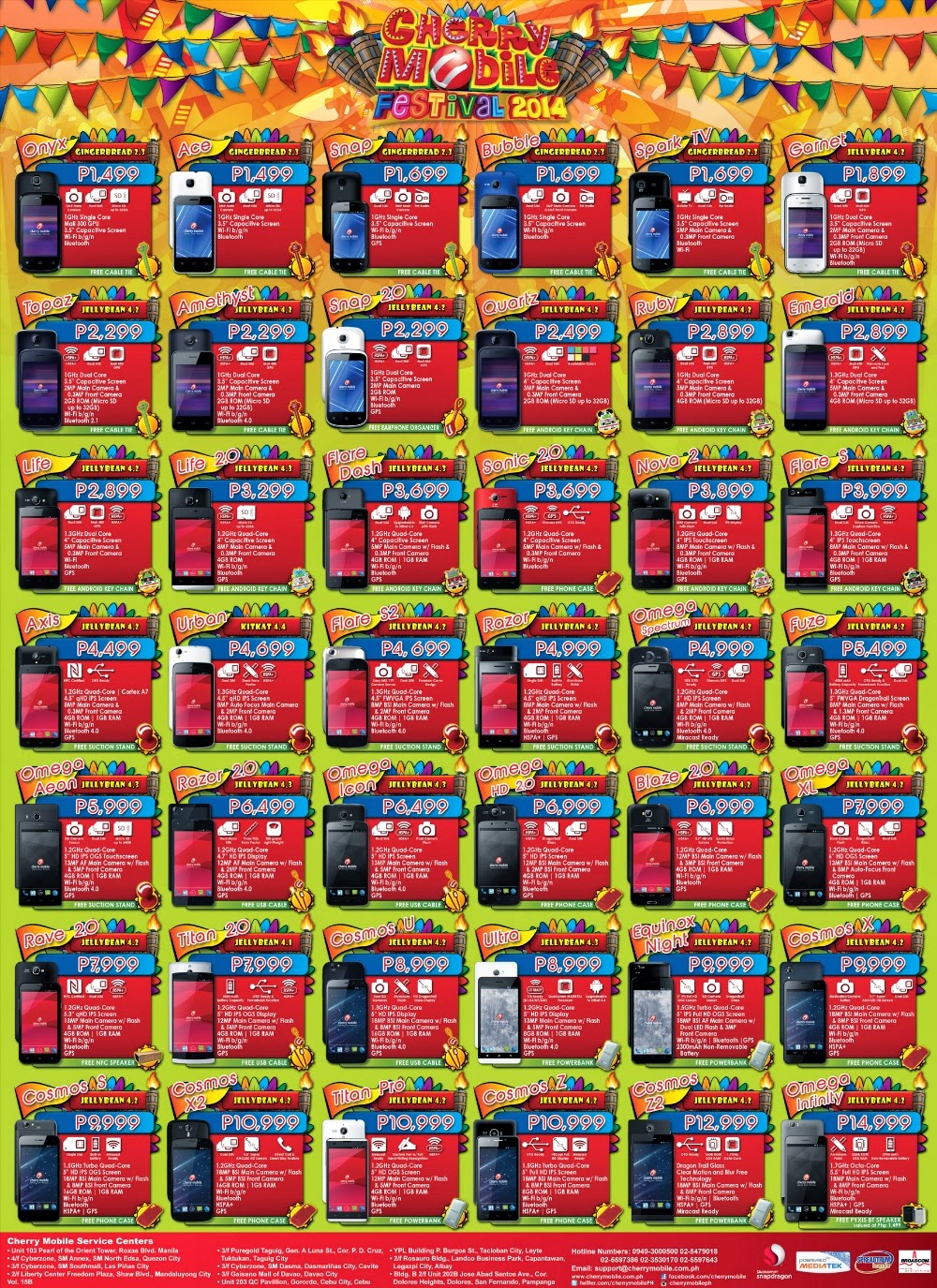 Another interesting thing here is the releases' naming convention. Most of the smartphones now have 2.0 or X numbers as a marker for the continuation of the series. What obviously deviated from the rest is the Cherry Mobile Equinox Night. It's a mouthful, but at the same time it sounds so cheesy. It's also interesting that the Flare HD, the Flare 2.0, the Flare 2.1, and the Flare 2X, are all out of the picture, and are replaced by lower resolution displays that carry the Flare name.

Speaking of naming conventions, the octa-core Cherry Mobile Omega Infinity coincidentally shares a name with another existing octa-core, the MyPhone Agua Infinity (which sadly, we never heard of again. Is it already on sale, or was it announced for the sake of announcement?). We understand that we mentioned the word "coincidentally", but is it truly coincidental? If it boils down to specifications and pricing, which Infinity would you choose?

On the specifications side, plenty of the new releases are now running on quad-cores clocked at 1.2GHz and 1.3GHz (except for the company's high end devices, which are at 1.5GHz), 5-inch HD IPS/ HD IPS OGS displays, and highly-likely interpolated 12-megapixel and 18-megapixel cameras. What's surprising is the lack of mention of battery ratings on most of the smartphones in the digital poster released (except for the Fuze, the Titan 2.0, and the Omega Infinity). It's safe to say that you should expect around 2000mAh battery ratings on most of the quad-cores unveiled.