Relatively new local mobile brand SKK (not to be confused with another local brand, CKK) recently announced on their Facebook page the launch and availability of their latest and most powerful Android flagship to date, the SKK Kraken.

The SKK Kraken is the company's first octa-core smartphone, and was promised previously that it was also going to be the most affordable in the market, with a lot of hinting and teasing with the number "8". The Kraken boasts a 1.7GHz MT6592 octa-core processor, 1GB of RAM, a Mali 450 GPU, an 8GB built-in storage, and an 8-megapixel camera. The downside to its possibly low price is its 5-inch IPS FWVGA display (854x480 resolution), its low battery rating at 2000mAh, and its OS being stuck at Android 4.2.1 Jelly Bean. Its 1GB RAM count might also be an issue, as it's more preferable that an octa-core come equipped with 2GBs of RAM. 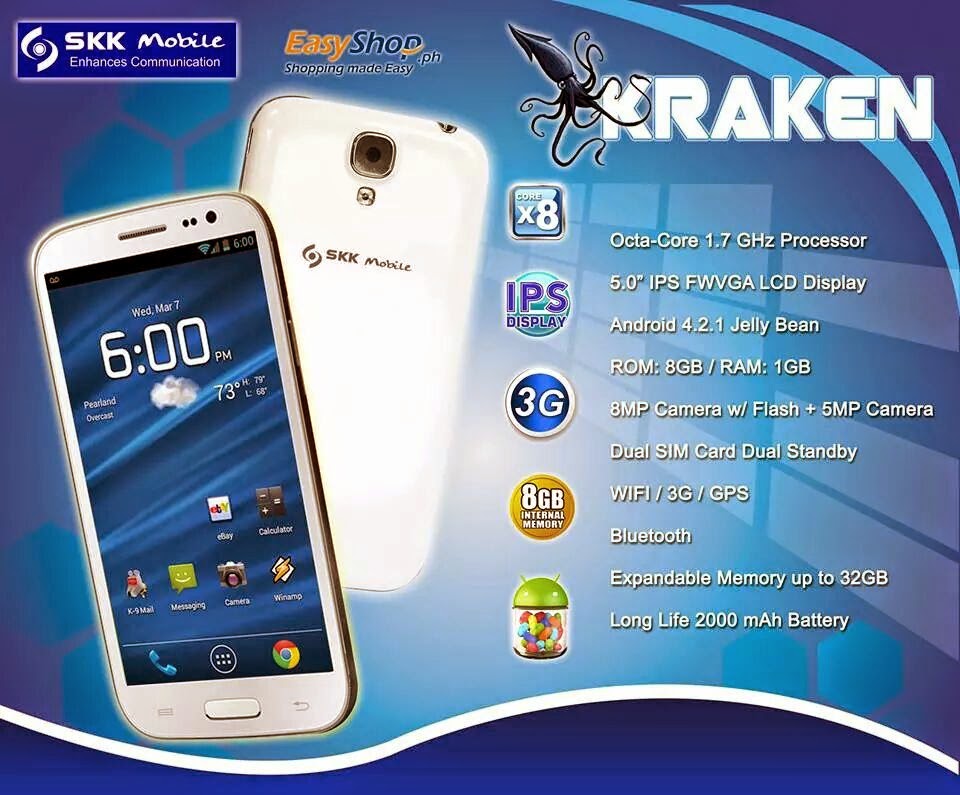 Regarding design, the SKK Kraken is a deadringer of the Samsung Galaxy S4, with its form factor, its home button, and its camera and flash design and location, not to mention the color, which is definitely beautiful.

If past experience is any indication, the Kraken, if properly optimized, may blow past current octa-core benchmarks, mainly because of its low resolution (a low resolution display eases the load on the smartphone's hardware) and fairly high hardware. If we're correct, it may push past the 30,000 mark on the popular benchmarking app AnTuTu.

There's no official word on the price yet, but as mentioned, SKK previously implied that the Kraken's pricing is around the P8,000 mark. If you know the price, be a buddy and leave a comment below.

With regards to naming, the Kraken is a legendary giant octopus or squid that is said to live around Greenland or Norway. Both an octopus and a squid have 8 tentacles, while the SKK Kraken have 8 cores. A perfect name for a smartphone if I may say so.