Local mobile brand O+ recently made available their first octa-core Android smartphone, the O+ Air. The O+ Air, aside from the powerful hardware, measures only at 6.8mm, grabbing the "slimmest" octa-core smartphone title here in the Philippines. It's also constructed from aluminum and has a unibody design. 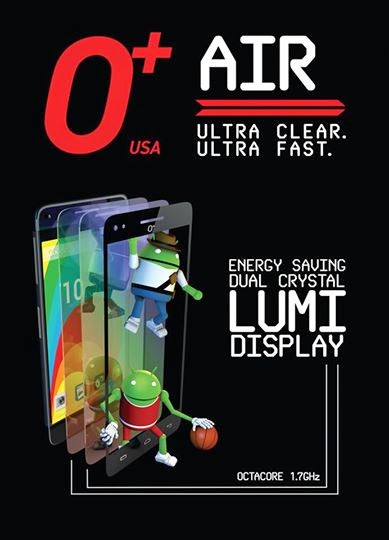 Surprisingly, the O+ Air will run on Android 4.4 KitKat right out of the box. If you'll recall, most local octa-core devices still run on Android 4.2 Jelly Bean. What we don't know is that if the Air will run on vanila KitKat or will sport its own skin or dedicated O+ UI. Another aspect of the O+ Air that battery freaks would love is the device's LUMI display, which allegedly is optimized for small battery consumption (resulting in longer battery life, even with a 2000mAh battery rating) while producing sharp display.

The O+ Air comes a tad expensive—P13,995 SRP—than a majority of its octa-core counterparts, especially considering that it's a little bit short on the RAM and battery size. Only the Cherry Mobile Omega Infinity (P14,999), the Starmobile Octa (P16,990), and thee THL T200 (P14,999) comes as more expensive.