Local electronics giant Cherry Mobile recently announced the latest incarnation of its budget smartphone line, the Cherry Mobile Flare 3. The device comes after weeks of online teasers about the company pulling off a - and I quote - "#3peat" on its product line, and probably as an answer to MyPhone's Agua Rio budget line of devices. 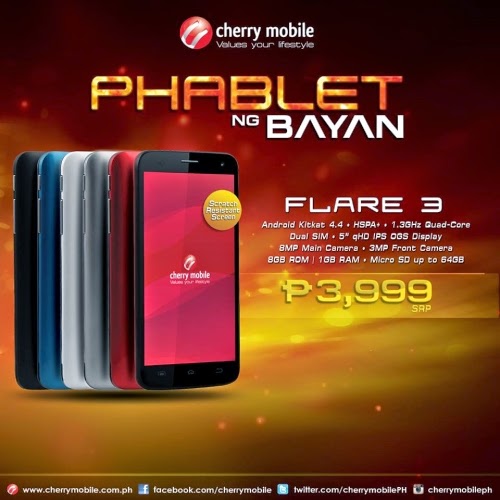 The Cherry Mobile Flare 3 sports a 5-inch display which is both IPS OGS and scratch-resistant, albeit only coming in a qHD resolution; a 1.3GHz MT6582 quad-core processor paired with a Mali-400MP GPU and a 1GB RAM, which are still a relatively powerful combination, if you don't buy into that octa-core stuff; an 8GB internal storage and microSD card support up to 64GB, which are relatively neat for such a low price point; and an 8-megapixel rear camera with BSI and LED flash. The Cherry Mobile Flare 3 also sports a 1980mAh battery and operates on the Android 4.4 KitKat OS. The seemingly small battery life shouldn't be an issue because of the power-efficient OS, the low-demand display, and the efficient MediaTek chipset.

Aesthetically, the Cherry Mobile Flare 3 has a pleasing look, almost reminiscent of the Cherry Mobile Cosmos Z, though admittedly the paint finish on the rear plastic shell looks somewhat cheap. It should not however be a letdown, because there's just so much P3,999 could afford. It also apparently has no notification LED and USB OTG, though that would somehow be asking too much for a below P5,000 smartphone.

The Cherry Mobile Flare 3 is now available at major Cherry Mobile kiosks in Metro Manila and select parts of Cagayan de Oro, with a rollout to other parts of the nation soon, and is available for a suggested retail price of P3,999.