Netflix Officially Arrives in the Philippines, Starts at PHP 370

Well, that took some time.

US content streaming giant Netflix has finally arrived in the Philippines after years of waiting. The rollout to the country - along with 129 others - was announced at CES 2016 by Netflix Co-founder and Chief Executive Reed Hastings. Filipinos can now enjoy the service for free - at least for a month - and pay a recurring subscription fee of PHP 370 at the minimum. The service is popular partly because of its original content, such as Game of Thrones and House of Cards. 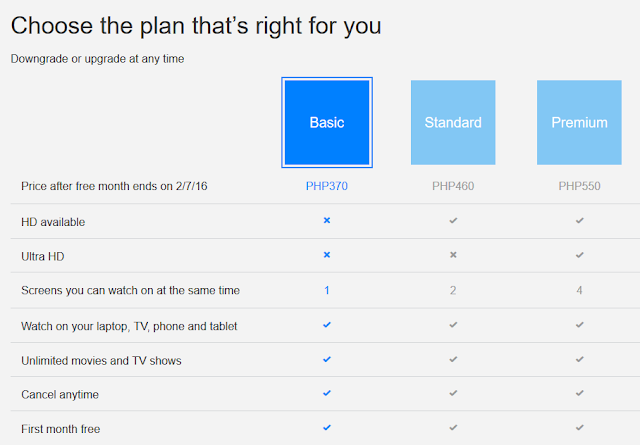 The Basic Plan (PHP 370) provides for SD or Standard Definition (480p) while the other higher tiers offer HD and Ultra HD respectively. Payments accepted are Visa, MasterCard, American Express, and PayPal Check out the Netflix table below.

What does this mean to other local streaming competitors like iFlix and Hooq though? Well, one thing's for sure: One will rise to the top. That is, if Netflix continues to geo-block popular content from the US here.