Final Fantasy VII, also known as FF7 (yes, it was known that way before Fast & Furious came along), is finally now ported to Android. This is great news, considering Final Fantasy fans have been harping for an official release for years now (if you'll recall, a few fans were bitter that Final Fantasy IX got ported first before VII). What's even greater is if you want to play the game in easy mode, it's already pre-loaded with cheats: Max stats, random encounter off, etc. 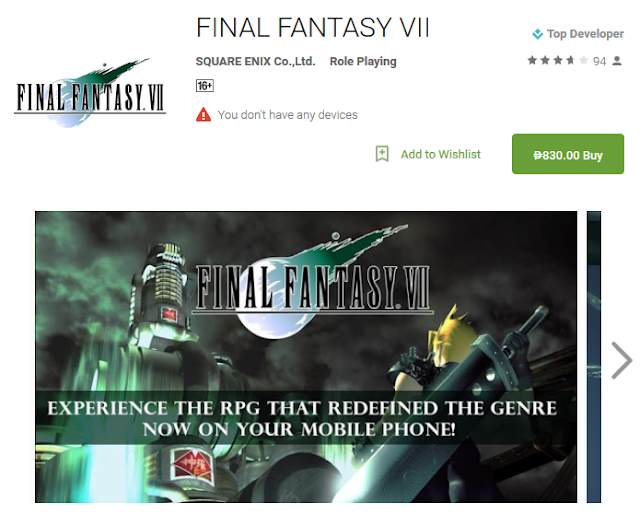 Unfortunately, as happy as the news is, the FF7 port to Android is apparently loaded with bugs, with one issue causing loss of data even acknowledged by Square Enix's mobile team itself. It goes:


Depending on the terrain and timing of the action, the buggy, submarines, airships, and other modes of transportation may cease to move when the player embarks or disembarks. Currently, the only fix is to restart the game from a data file saved before the bug occurred. We recommend saving frequently and/or utilizing multiple save files. This bug occurs most often when players embark or disembark while extremely close to the terrain, as well as during time-sensitive activities for events.

Please note that the game will not save automatically when escaping from a battle on the world map, even if the Auto Save function is set to the ON setting.

For a game that costs PHP830, that's a hard pill to swallow. On top of this, the game also requires 2GB of space, with 4GB free needed before installation.

Finally Fantasy VII originally launched on the first PlayStation in 1997.