We all know that the Huawei P9 with its Leica lens launched recently, and that it's a very well-rounded smartphone. But somehow, someone in Huawei's Marketing division felt it would be better to spin photo material if it was taken from something else.

A reddit post from user "JoshuaVincentET" reveals that a photo Huawei posted on its Google Plus page was actually taken by a Canon 5D Mark III with a EF70-200mm f/2.8L IS II USM lens. How do we know? Apparently Google Plus shares a photo's EXIF data for the public to see.

The actual Google Plus post was uploaded from March this year, but has been recently taken down (see https://plus.google.com/u/0/+HuaweiMobile/posts/joTnYPSmEb2). The screenshot of the said post is still available. See below: 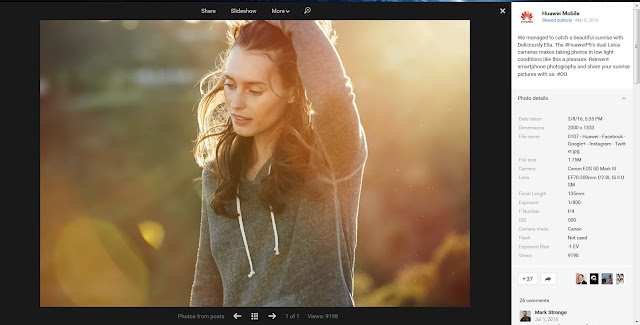 If you want to be a bit more technical, the P9, sporting a small camera sensor, shouldn't be able to create a shallow depth of field such as the one shown.

We take it that the P9 would've been more than capable to do an actual material, and are actually wondering why this became the case. Smartphone and other imaging companies additionally should be extra careful when uploading photos that they claim to be taken by their product.

To be fair with Huawei however, it wasn't explicitly mentioned in their post that the photo was taken with a P9. Then again, why would they delete the post?

In any case, here's a pro-tip for everyone: Scrub the EXIF data before you upload.